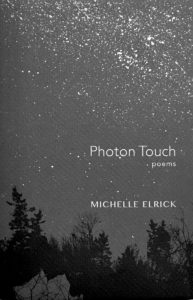 Michelle Elrick’s Photon Touch: poems is excitingly innovative and utterly impossible to categorize. It includes visual poetry. It is experimental and lyrical. It is an artfully designed object of book art, a chapbook, and a digital synth/pop/prog album with spoken word. It questions the boundaries between the evanescent, ephemeral experience of music and the archival, textural qualities of the printed word. It does much in few pages. Both states of the work, the album and the chapbook, draw attention to the existence of the other as its partner, which aptly reflects Elrick’s collaboration with Michael Belyea on the project. This mirroring of its other self is also built into both formats – the spoken word of the album contrasts with the musical rhythm and tonality to imply a written text, and the printed form invites revision, such as the illustrations and the perforated removable bookmark with the download key for the album.

The title points to recurring themes: a poetic move beyond ekphrasis to the synesthetic blurring of senses. In art, this is more common in musical synaesthesia, as in Franz Liszt and Alexander Scriabin. The black and white of the printed text suggest a grapheme-color synaesthesia as well. Photon Touch blurs senses most obviously with the “touch” of photons in seeing but also echoes the visual and aural qualities of language compounded by the musical paratext, including the visual qualities of musical pitch and tactility of rhythm. The collection’s notes say “The poems in this collection were written and/or selected, in part, for their qualities as spoken word pieces,” but this isn’t entirely the case. The textual object is bound up with visual illustrations that open, centre, and close the poems, and with a cover wrap that suggests the “touch” of photons from distant stars in some tactile communication with the universe. The typographical design (by Elrick), textured dust jacket, and Zephyr paper all contribute to this blending of sensory contact.

The accompanying album (included as a download with the book) has nine tracks and excludes two of the book’s poems: the visual poem “All This Is” and the short poem “11 June 2016, Banff.” By taking up the bibliographical concept of the textual witness, the reader might see these as two different states of the same materials. In that sense, the cuts to the content make a statement. The tension between the printed and spoken word stands out when the two are set together, hinting that the visual poem and the mantra-like “wake up” of the latter poem are something beyond what an aural experience can communicate. The mandala shaping of “All This Is” might remind some of the mandala-like visual designs in the Scivias Codex of Hildegard von Bingen, which does find its reflection in her musical settings of her texts. The album’s music is also deeply given to ostinati and leitmotifs and the idée fixe. This stands out in the basso ostinato and the synth figuration that moves on and off the beat in the first single from the album, “Bless Copernicus,” so much like Phillip Glass’s use of repeating figures. It’s all the more fitting that the publication heralds from Purcell’s Cove, recalling Henry Purcell’s attachment to the basso ostinato. What then surprises this reader and listener is that the textual representation of antiphonal voices in a poem like “Eclipse” is not echoed in the musical adaptation and spoken word, which impresses the distinctness of these two poetic witnesses: print and recording.

In a wider context, the poet-critic Don Wellman has fought for the lyrical mode against those who declare it passé or apolitical – Elrick seems to be after a similar prize: the wedding of a lyrical subject with experimental form. The lyric carries across the book with intriguing shifts from the self to the addressee and the plural community. “You Are Alone” opens with estrangement only to shift to a “We” that belies the isolation, closing with a shared aloneness. In the middle of the poem, the sunrise and eyes and the paired solitary figures point back to the book’s title and the physical contact of sight, the tactility of the celestial photons touching the eye carried from stars distant in place and time. As with all lyrical forms, the self finds itself through an other. This hardly seems a retreat from the world or the politics of experimentation, and an ecopoetical entanglement of the subject with nature repeats across the chapbook. In “Bright Leader,” the photons again move inward to the eye pressed near to the television screen and outward to “the galaxy bright in all directions” (20). But amidst this is the introspection of the speaker, both unreliable and deft in looking deep through memory. Readers will also sense the juxtaposition of coasts from the Atlantic provinces to the West, most provocatively in the recto-verso juxtaposition of Saint John (16–17) with Banff in the Rockies (18), but also how a younger generation struggles to fit into the transforming world and altered ecology. It seems almost a deliberate enactment of the epigraph from the dictionary to define “world” in the sense of a sphere or globe, sending the reader along the curve across North America.

Elrick’s poetic voice is laconic yet dense with connections across the poems. She repeatedly points outward to a larger world while expanding the smallness of interior life. We have a guide to both inward and outward landscapes, and if there is a Romanticism at work in that, it is also sewn in with our multimodal, remediated, ecopoetic literary landscape today. Elrick’s previous books have garnered much praise. Photon Touch will have more when her readers become her listeners through a synesthetic contact with text.