Most of what follows is true : places imagined and real by Michael Crummey

Most of what follows is true : places imagined and real by Michael Crummey 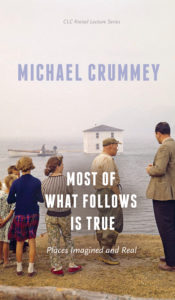 Most of what follows is true reads as the beginning of a blueprint for writing about real places, historical figures and facts, in both fiction and nonfiction. While Michael Crummey gave this lecture in an academic context, during the Kreisel Lecture Series (University of Alberta, 2018), he definitely speaks from a practitioner’s stance. In this booklet of barely 40 pages, he launches writers on a path of self-reflection about their own use of real elements, while raising readers’ awareness about the cultural and social effects of such literary representations.

The novelist and poet from Newfoundland proceeds to a critical reading of a small body of works, by other Maritime writers or by foreigners who have chosen a Newfoundland location as their setting: Wayne Johnston (The Colony of Unrequited Dreams), Howard Norman (The Bird Artist), Annie Proulx (The Shipping News), among others. Underlying his whole demonstration is this idea that “[i]n some barely definable way, the real world does not fully exist until it has been fictionalized or ‘told’, until the mirror is held up and we see our own faces” (5). He offers a profusion of concrete examples to illustrate the possible pitfalls of writing about real-life characters and places, of holding this figurative “mirror” to people’s faces.

Perhaps because he is himself a writer, the author does not fall into the trap of enunciating rules or prescriptions, but points out factual errors, omissions or liberties taken by writers. He then raises very topical questions: “What do I owe to the history and the historical figures I was writing about? What are the limits to the liberties that can be taken?” (36-37). He also wonders if there comes a point where writing imaginatively about real people and places trespasses onto cultural appropriation? Voluntary or not, he argues, these creative choices alter the work’s reception and can bring forth a lot of criticism from the people who feel they have been misrepresented. At the same time, when a place like Newfoundland is repeatedly used by great writers as the backdrop for their story, it can “make a significant mark nationally and internationally” (7).

While we can certainly grasp his general ideas and point of view without having read any of the titles he mentions, some subtleties of his explanations might elude us if we do not make the effort of cracking open some of those books. It is precisely the kind of lecture from which you learn in proportion to the intellectual effort you are willing to input and a very compelling example of the necessity for a writer to read consciously and reflect on her own practice in order to write better.

Karine Legault-Leblond’s whole life revolves around books: emerging Quebecer writer and French Lit student (University of Ottawa), she works full-time in a library. In 2015, she won a literary prize for one of her short stories, which was published in a collection. She keeps on writing, reading and learning about the craft.

This entry was posted in All Reviews, Book Reviews, Lecture. Bookmark the permalink. Both comments and trackbacks are currently closed.