Of Human Bondage by Vern Thiessen, Lac/Athabasca by Len Falkenstein, This Is How We Got Here by Keith Barker & Punch Up by Kat Sandler

Of Human Bondage by Vern Thiessen, Lac/Athabasca by Len Falkenstein, This Is How We Got Here by Keith Barker & Punch Up by Kat Sandler 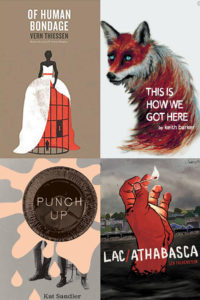 It is always dangerous to make predictions, but it is likely that the firm place of Canadian playwriting in the nation’s theatres will hold and continue to grow.At one time, even as near as a generation ago, that wasn’t certain. In many ways, Canadian theatre represented by the regional theatres was a colonial theatre (English and French) which either rejected, with rare exception, the idea of a local play, national or regional, while holding firm to British models and a mixed British-American repertoire. The battles not only by playwrights but also directors, who rose out of the nascent theatre nationalism of the late sixties and early seventies, led to an ‘alternative’ theatre whose mandate was the growth of Canadian playwriting. No need to repeat that history here, except to note that the strength of Canadian playwriting continues in many incarnations from, as the sample of plays examined here show, the literary adaptation to distinctly regional and, to use an awkward term broadly, ‘ethnic’ plays, a rise of Indigenous playwrights, as well as those with a specific ‘identity’ politic.

As a participant in that time, however minor my role, I can say that the battle in Manitoba in the late seventies and early eighties towards establishing a smaller but vital alternative theatre with local playwriting at its centre was a heady, often exhilarating, and sometimes difficult one. The rewards, however one may grumble about the current theatre aesthetic in Winnipeg, or Canada for that matter, was clearly worth it for the artists and the art. Before it there were some voices in a lively playwriting wilderness; now there is a solid community and the legacy of a literature.

This brings us to the spate of recent plays. In a way they represent the current end game of our current playwriting (the goal posts will of course move quickly).

Start with adaptations. What we have seen in the theatre has been a burgeoning of adaptations of novels, but more than that, a growth of adapting films from novels. It’s an odd phenomenon in that more likely today than not, the film version of the novel is what makes it a good plan for a theatre—particularly a big theatre like Royal Manitoba Theatre Centre—to present it. The dwindling reading public is still interested in seeing a staging of a literary ‘classic’ as much as the growing reading public in the 19th century wanted the latest novel on stage. The current trend is towards the early 19th century, say, Austen to Bronte, the recent Sense and Sensibility adapted by Winnipeg playwright Ellen Peterson being a good example of what is desired.

With his adaptation, Of Human Bondage by Somerset Maugham, Vern Thiessen jumps to the late Victorian era. Here, however, he is dealing with an author whose reputation, unlike Austen or Dickens, has declined severely since his death in 1964. It may rise again but a couple of generations on from his death it seems unlikely. Of Human Bondage remains his most famous book, but probably only some of his short stories will stand the test of time as important, or almost important, literature. In any case Maugham might seem ideal for the adaptation treatment since through his life and especially with the appearance of sound film in the 1930’s, his work was adapted widely until the late 1950’s. Any fan of old, so called ‘classic’, films has seen many an adaptation of Maugham’s novels and short stories and even plays though those have almost gone away.

In any case the most recent film adaptation of a Maugham novel, a sumptuous version of The Painted Veil, released in 2014, was a box office failure. Simply put, there are few now to champion Maugham except his adaptors. In this regard, Thiessen must be applauded for making the novel a tight, swiftly moving affair as a piece of theatre. He has compressed the world of the novel so that it flows through the dialogue and movement without narration often the bane of many a novel’s adaptation. The playwright disappears into the work and leaves us feel the novel so to speak while watching the stage or reading the text of the play.

The story of medical student Phillip Carey’s fall and rise in late Victorian England concentrates on the heart of his decline, his obsession with Mildred, lifted only by her death though he had moved on to a saner life. The only still interesting thing in the novel, Mildred as a flamboyant, dominating spirit, is kept in the play with great balance. She is the often negative self or force, male or female, that one encounters often in life, becomes obsessed with and controlled by. You have to move on from this force or be destroyed by it. In a sense you have to move on to adulthood, no matter your calendar age. The burden is lifted only by the death of the obsession represented by the degenerating force dying. Thiessen deals with this in the play with restraint, necessary on stage though not always on the page of a novel. In the end, however, what are we left with? A dazzling—and sometimes moving—piece of dramatic construction may be all the audience needs and Thiessen has provided it in spades in this adaptation.

Next, we have a fair sampling of plays which arose from the Fringe festivals, and Summer Works festival in Toronto. For good or bad, the playwriting at these festivals has moved in the 40 or so years of the Canadian Fringes from the ignored periphery to a serious contender as the centre of play creativity just as small companies have challenged large regional companies in creating a body of work reflecting their community.

The plays here are part of that and represent the kind of play one encounters often in the smaller theatre of a city with a big ‘regional’ theatre or in that theatre’s—Royal Manitoba Theatre Centre is a good example—2nd stage. Nothing wrong with that necessarily, but the edginess of many earlier Fringe plays, admittedly a broad, hard to define concept, has been replaced by the small family revelation play, the issue play, and the wild black comedy. All provide a good night out; certainly all three would make a good Fringe evening out. Take This Is How We Got Here by Keith Barker. In it a family, parents, Lucille and Paul, an aunt, Lisette, Lucille’s sister, and uncle, Jim, best friend of Paul, deal with the suicide of Lucille and Paul’s son, Craig. Throughout the play Lucille sees a fox with the action beginning about a year since the suicide. The men are searching for Lucillle who has followed the fox. Her growing belief that Craig has been re-incarnated as the creature is echoed by legends of a fox and his appearance at times raiding gardens. The play moves skillfully between past and present as the family attempts to come to terms with the why of the sudden suicide. The minutiae of conversations and gestures are gone over in the search for a reason with little result. The fox disappears but it has moved the grief and despair of the group to a quiet acceptance. What is good about the play is that it wins you over despite the somewhat confused use of the fox as symbol. It is at the centre of a child’s story which Paul told innumerable times to Craig with the fox itself a magical storyteller. This symbol isn’t as potent as the playwright wishes. For one thing it seems a little heavy handed, even imposed on the action. The story of the fox means a great deal to the parents because it was told over and over to the son when he was a child but this isn’t infused into the dramatic action, specifically the mother’s grief, strongly or perhaps better put poetically enough to resonate as more than a device. Also, the play’s clear strength which is the desperate, guilt edged conversations amongst the four (Craig is only heard but never seen) is somewhat dissipated with monologues reflecting the journey taken by the characters, especially Paul and Lucille, through the year since the event. The monologues vary between strong and weak and seem an interruption at times and, worse, extra weight to the action making the play a hybrid. This story could have been told through monologues, but the best parts show that it needn’t be.

Lac Athabasca by Len Falkenstein is something else. Very much an ‘issue’ play couched in a cautionary tale—the relentless exploitation of the oil sands (of Nature herself) leads to the derailment disaster at Lac Megantic—it is also a dynamic play of mystery. Four stories are told and while three intersect in a surprising yet inevitable way, the historical context portion, so to speak, doesn’t have the force necessary to make the impact the playwright clearly wants to unsettle the audience. In the early nineteenth century a fur trader is pursued by some force which his companions, a Métis guide and an Indigenous woman, know is the terrifying force of nature, the Wendigo. At the Alberta oil sands two freshwater biologists argue about the pollution from it. A young Quebecer comes to work in the oil fields and so distraught by his discovery of a body he returns home to the town where the derailment of a train carrying the oil senselessly occurs. The suggestion that the body may be the trapper or someone connected with that part of the play is nebulous at best. As noted, it is a play of mystery but sometimes Falkenstein stretches that into confusion. However, the interweaving of the stories is dramatically convincing as a device. This is, whatever the weaknesses, a skillful, powerful play which is political in the best sense showing human beings in situations dominated by the circumstances of society leading to no simple answer but only more questions as to how we can function in this world we created. It deserves more productions. One way of course we can cope is through laughter at ourselves and society.

Punch Up by Kat Sandler doesn’t offer a panacea but it is what comedy should be making you laugh and think about what is funny. The tag line in the printed play outlines it best: The most pathetic guy ever kidnaps the funniest man alive to make the saddest girl in the world laugh.

One could add complications ensue. The play is a lovely quick-witted pleasure sketching in character as we alternate between the desperate but forceful kidnapped comic, the slightly batty kidnapper whose despair over not being funny becomes both endearing and unnerving, and the saddest girl who seems to invite disaster into her constricted life. Of course, being a comedy, a happy ending ensues, but the getting there makes it worthwhile. The point may be that in our lives the seemingly offensive, distressful and even dull parts are potentially funny to others. It is the balancing act of existence itself that invites laughter. Sandler never judges or points a moral which could be easy. She may not love her characters, and they aren’t easy to love, but they will seem easily familiar.

If as noted earlier these plays give a good representation of where our theatre might be at the moment, then our theatre is in a good place or at least a widely diverse place which is where it must be.

Rory Runnells is a Winnipeg writer.  He was Executive Director of the Manitoba Association of Playwrights for 34 years. He reviews for the  Winnipeg Free Press.
This entry was posted in Book Reviews. Bookmark the permalink. Both comments and trackbacks are currently closed.