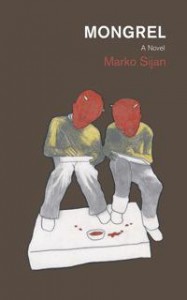 Think of the word “mongrel” and the image of a mixed-breed dog comes to mind. In this case, the term refers to the ethnically mixed protagonists in Montreal writer Marko Sijan’s debut collection of short fiction. Replete with sex, violence and moral ambiguity, his five interconnected short stories take an unblinking look at a group of teenagers from the same high school in Windsor. Mongrel was long-listed for a 2012 ReLit Award and named among the Best First Books of 2011 by the Globe and Mail.

That the stories all take place on June 10, 1999 is no coincidence. In fact, the United States ended its 78- day bombing of Serbia on that date. The protagonists include several pairs of siblings: Basha and Milan, whose parents immigrated from the former Yugoslavia, as well as Lenny and Sera, whose parents are Jamaicans. Sophie and Gus are the children of a francophone divorcee who moved to Ontario from Quebec. The stories are set in Windsor and Detroit.

The protagonists all know each other from school. Eighteen-year-olds Basha and Lenny are living together. She and Sera are best buddies who have befriended Sophie, an anorexic ugly duckling. Sophie’s younger brother Gus and Basha’s brother Milan always hang out together. However, Sophie’s sometime boyfriend Gunther and his posse often beat up the two boys.

In the first story, “Detroit Is Beautiful at Night,” the opening scene immediately draws our attention. En route to a party in Detroit, Basha, Lenny and Sera are detained at the border and we learn about the dynamics of their relationships. Tension mounts as the customs officer searches the trio; unbeknownst to him, all three friends took ecstasy pills just before reaching the border.

Written in frank, visceral prose, each story is narrated in the idiosyncratic voice of one of the teenagers. In one instance, Gus describes a violent incident at school:

Gunther’s eyes light up like firecrackers and he cranks his head to his posse, who are slapping Milan’s face and chest and calling him a Serb rapist baby butcher. Every time Milan tries to bury his head in his arms, they slam his skull against a locker. (64)

Often the narrators revisit the same event, presenting it from their own unique point of view. This clever overlapping of details forces readers to piece together what really happened and draw their own conclusions.

Ultimately the stories offer an intimate, albeit unsettling take on adolescence, for all the protagonists experience a sense of alienation within their turbulent lives. Yet despite his cynical viewpoint, Sijan manages to make us care about what happens to these characters.

Throughout the collection, the border setting echoes the bleakness of his outlook. In Sijan’s words, “Windsor . . . is closer to Detroit, looming over us like a shadow, warning us to awaken from our slumber, to be alert and trust only those we love.” (38)

As for the American side of the border, “Anorexic bushes and trees caked in black exhaust, bloated garbage, rusted trucks, shredded tires, shattered glass, squirrel and raccoon roadkill and orange pylons line the interstate . . .” (16)

Readers familiar with The Dirt Chronicles by Kristyn Dunnion will discover a few kindred spirits in Mongrel. Sijan’s linked stories are strikingly Canadian in their depiction of teenage angst with a multicultural twist – a promising debut for this writer. ♦