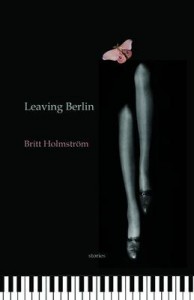 The protagonists in the short-story collection Leaving Berlin are typically failed romantics who have been forced to change their perception of the world. The reader is invited to look over the shoulders of characters at the same time as entering their point of view in order to notice the gathering ironies and to recognize a variety of divine comedy in the struggle of their human relations.

In the title story, a disenchanted lover wrestles in her relationship with her egocentric musician boyfriend Henry, and in “The Soul of a Poet” Philip plays a similar role of artist-poet poseur/impostor. “Blue Album” has a mid-summer night’s dream quality that leads the protagonist – recently estranged from her husband – to seek refuge in lodgings shared with a roommate who lands her with an unlikely Bottom-like relative for an overnight companion. Another delightful symmetry reminiscent of Shakespearian comedy informs the plot of “Doing Laundry,” in which two women who fail in love are brought together in a laundromat with an envied third party – an attractive but coarse young woman with a flatly dismissive and startlingly misconceived opinion of the other two women. In “Under the Eiffel Tower,” the middle-aged, married protagonist’s romanticized view of the gypsies, encouraged by her mother’s girlhood idealization, is compromised. In the two penultimate stories, inadvertent failings and a lack of self-awareness among seemingly intelligent characters are showcased: while in “The Sky Above Her Head” the protagonist’s cynicism may be attributed to her interfering, self-righteous sister, in “The Rebel Doll,” the protagonist (a judge, no less), in critically judging a group of strangers while on vacation, must come to terms with her own shortcomings. In the final story, “Charmed,” the protagonist chooses safe marriage over romantic love, but later sees that she may have made a mistake – still, she has learned from her mistakes to understand what love may be.

Dysfunctional relationships become the norm. As the chill between the moody Henry and the narrator in the title story intensifies, an interlude in the Berlin zoo occurs in which the orangutang’s close relationship with the zoo-keeper appears in sharp contrast to the uneasy one between the human couple. Rather than from the perspective of God, a bathetic ‘divine comedy’ of sorts may be witnessed through the orangutang’s less sophisticated view. The orangutang at first appears lifeless, but when the zoo-keeper hosing the area with “meticulous care” approaches the “stark cell,” the apparently affectionate animal comes to instant life:

Then in the unkempt pile of fur an eye flipped open. It was an eerily intelligent eye, out of place in that mangy pelt. Sliding from left to right, the eye surveyed the supposedly superior Homo Sapiens gawking back at it, but it was only when it spotted the old man that its supreme indifference gave way to alert recognition. (17–18)

The animal fondly touches the old man’s face and displays his trust of this zoo-keeper, behaviour that seems more human that Henry’s, as he steps back from the cage and doesn’t allow his frightened girlfriend to take his hand.

In contrast, “The Blue Album” presents in a shady comedy that surprisingly gathers redemptive features in the course of its narration. Housed for a night with a criminal, Gordie, who is on a weekend leave, the protagonist Brenda affects the Gothic romantic heroine. As she goes to bed, she “[adjusts] her black shawl to a tighter fit” and tries to look as if she has “grown fangs and was floating off to sleep in a coffin” (55). The next evening, at the height of her anxiety, she carefully prepares a meal to please Gordie, which serves as a “lavish exhibition of something she did not feel”:

When called to the table, Gordie sat down and for a suitable length of time let his eyes behold the splendor. Then he threw manners to the wind and applied himself to the food like an industrial vacuum cleaner. The expression on his face was one of weepy pleasure. Which was as it should be. It was the most generous meal she had ever prepared, a lavish exhibition of something she did not feel. (62)

Holmström is an expert contriver of situational ironies, as the plot of this hilarious story attests.

In “Under the Eiffel Tower,” Holmströmemploys dramatic irony to allow the reader to see more than the characters. After Carol has put off a persistent young gypsy beggar who demands “You give me!” (184) over a coveted medallion, the reader is afforded a glimpse into the larger struggles of his small world. Although the gypsy beggar’s mother does not openly acknowledge his young presence (or his brother’s), Carol soon discovers that the family works as a team begging from wealthy tourists in front of the Eiffel Tower. After Carol leaves the “pest” and hopes that the gypsy boy feels “ashamed” of his rude behaviour, we are given a brief glimpse into Pépé’s life. Having withdrawn from Carol’s company, the boy leans up against his mother’s shoulder as she sits on the bench and momentarily closes his eyes:

Without moving her head, without changing her facial expression, still looking vaguely, vaguely amused, the woman moves her left arm back and outward at the elbow, forming a triangle, a featherless wing. With a swift flap it hits the boy in the back, batting him forward off the bench. Like a fledgling he falls to the ground, but quickly gets up, never once looking at the woman who does not so much as glance at him. (186)

While the “fat cow” with the large derriere (from Pépé’s point of view) considers where she will dine when the group comes down from the Eiffel Tower, the gypsy boy’s stomach growls.

Leaving Berlin is a skilfully written collection, whimsical and down-to-earth, ironical and intelligent. Holmström is a master of tone on many levels, be it through subtleties of reported speech, situational comedy or through dramatic ironies that allow us to see the larger picture. While many of her protagonists are articulate, opinionated characters, she does not let even the strongest and most intelligent of them have the last word as she shines the mirror of truth through their personal blind spot back into their faces. Except for a few overwritten stretches in “Charmed” (whose style perhaps suggests the labyrinthine twists of the human heart and love but which I found repetitive and chronologically confusing), these are polished stories and the work of a pro at the height of her career. ♦