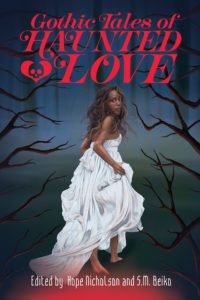 There is a tendency when thinking about the history of comic books to privilege the superhero, to reduce comics as a medium to the mystery men and women who fight crime in all their caped glory.

There are both historic and cultural reasons that this happen—the birth of the superhero coincides with the moment that the comic book as we understand it asserts itself as an entertainment medium, and there can be little doubt that the superhero is among the twentieth century’s major contributions to the realm of myth—but this limited view ultimately does a disservice both to comics as an artistic medium and to the reader. From the very beginning, comic books have been filled with funny animals and bug-eyed monsters, teen romances and two-fisted pulp adventures. Comics has always contained multitudes.

This is one of the interesting things about the Gothic Tales of Haunted Love anthology edited by Hope Nicholson and S.M. Beiko. The book collects a number of contemporary takes on the gothic romance and, in doing so, revives one of the more obscure genres in comic book history. It is a genre that comics historian Jacque Nodell refers to as “merely a blip on the radar of the mainstream comic book industry” in her introduction, flourishing briefly after a relaxation of the Comics Code in the 1970s.  While the more-or-less straight horror or superhero-adjacent horror books of the mid-70s managed to hold their place in comics history—Marvel’s The Tomb of Dracula and Werewolf by Night are a product of the same loosening of the Comics Code—the gothic romance didn’t, but Gothic Tales of Haunted Love serves as compelling antidote to that. The gothic romance may be well established in both the literary and cinematic traditions, but Nicholson and Beiko’s collection reminds us of the potential it brings to comics.

The book, insofar as it does the work of recuperating a lost, forgotten or otherwise unavailable part of comic book history, is of a piece with Nicholson’s previous editorial work. In the best possible way it recalls the two volumes of Moonshot: The Indigenous Comics Collection that Nicholson edited, and fans of those books or Nicholson’s The Secret Loves of Geeks collections will have plenty of cause to enjoy Gothic Tales of Haunted Love.

One of the book’s key strengths is the way that it diversifies the genre. The protagonists in these stories are not merely girls, waifish and white, in flowing white gowns fleeing monstrous masculine threats to their virtue across foggy moors. Rather, they represent an expansive range subjectivities which serve to shape their stories and are often granted a fair degree of agency. By including stories that represent Black, First Nations, Asian, and Queer perspectives, Gothic Tales of Haunted Love works to expand the gothic and allow it to represent a mode of being rather than a narrative structure. The repressed returns and must always be confronted, but what the repressed is and how it functions goes beyond the historical roots of the genre.

Gothic Tales of Haunted Love is a strong anthology. While a few of the stories seem to struggle a bit with the formal structure of the comic book short story and resolve slightly more abruptly than they feel they should thus undercutting the twist or resolution, the vast majority make elegant use of the space. While it should be understood that which stories readers favour in an anthology like this will very much be a subjective thing, there are a number of clear standouts. Janet Heatherington and Ronn Sutton’s” Crush” effectively captures the feel of the EC Comics horror books of the 1950s. David A. Robertson and Scott B. Henderson’s “The Return” re-contextualizes the return that lies at the heart of the Gothic and allows the haunting to be a moment of agency. “What’s best” by Katie West, Ray Fawkes and Zakk Saam reveals a beautiful synergy between the story and the art. The most interesting story, though, is likely the hardest to read. Hien Pham’s “Minefield” presents the dialogue as it would be heard untranslated. This means that the Vietnam War story is largely in Vietnamese with English intruding on the narrative when American soldiers arrive searching for Viet Cong. This has the potential to be disorienting, however, Pham’s art works to convey the narrative while the language of the text forces the reader to consider their positionality. It constitutes a remarkably effective use of the form.

Nicholson and Beiko’s anthology would be valuable simply for recouping a forgotten moment in comics history and modernizing it. However, the strength of the stories and the way that they modify and expand on received tradition are what make it a wonderfully enjoyable book to read, and a potential entry point into the vast possibilities of the comic book.

This entry was posted in All Reviews, Book Reviews, Graphic Novel. Bookmark the permalink. Both comments and trackbacks are currently closed.