Bird-Bent Grass: A Memoir in Pieces by Kathleen Venema

Bird-Bent Grass: A Memoir in Pieces by Kathleen Venema 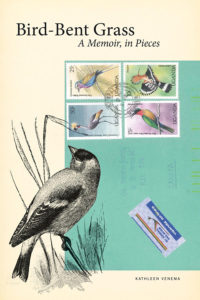 Bird-Bent Grass isn’t what I expected it would be.

I thought: a memoir about a mother’s Alzheimer’s and a daughter’s three-year sojourn in Uganda in the mid-to-late-eighties—by a Canadian woman writer who is just my age and in the exact same professional role—now that’s going to be exotic, instructional, and replete with shared points of reference. I expected a cross between the TV series Wildest Africa and a really sympathetic how-to guide on coping with a parent’s dementia. What I found instead is a very profound, detailed, recursive documentation of the 30-year relationship between two adult women in that most common, but perhaps least written-about relationship of mother and daughter.

Kathleen Venema went to Uganda—a Uganda just emerging from violent civil war—in 1986, as a 25-year-old, to teach for three years. It would not have occurred to me, the same age at that time, that such a thing was possible. My parents certainly wouldn’t have thought it a good idea. But Venema shows, though excerpts from hundreds of letters exchanged over those three years, that she had already been exposed to a lively discourse of social justice, inclusivity, compassion, and global awareness. The letters between mother and daughter are marked not by stories that make Uganda exotic or other, but rather by intense discussions and self-questioning both of the daughter’s relationships and interpersonal responsibilities at Lady Irene College, and her mother’s explorations of art and philosophy and humanitarian religious questions back in Manitoba. No descriptions of bizarre ethnic rituals or depictions of gorillas in the forest.

The letters from the late 1980s are interspersed with narrative from the late first decade of this century, and the two time periods are linked by the author’s project, in the more recent time, of re-reading and discussing the kept letters with her mother, partially in a bid to keep memory and cognition flowing. I found the relationship between the two time periods difficult to follow, at times, and there is perhaps too much recursiveness—in a couple of places, even covering the same ground too closely. In some ways, the book reads more like an academic work in the social sciences; normal narrative organization is interrupted by a return to mine the same event over and over. There were also too many accounts of in what order and at what speed the original letters arrived, and too many reckonings how many of the letters between Canada and Uganda were lost. I recognize that those details add to the scholarly heft of the book, but they did not always keep my interest.

I felt, however, both moved and enlightened by the documenting of two such curious and articulate and inclusive intellects—by the conversations that move through this memoir, and link its disparate parts—by wise and profound detailing of this auto-ethnography. The image of “bird-bent grass” from the title evokes for me both a close observation of affect and a contemplation of impermanence, and I was invited to experience both of these states inside a lively, articulate, and sensitive account.

Karen Hofmann has published fiction and poetry in several literary magazines, including Prairie Fire. A first collection of poetry, Water Strider, was published by Frontenac House in 2008 and shortlisted for the Dorothy Livesay prize. Her first novel, After Alice, was published by NeWest Press in 2014, and a second novel will be published in 2017. Karen teaches literature, composition, and creative writing at Thompson Rivers University in Kamloops, British Columbia. Her writing explores relationships, especially of family, and the landscapes of the BC Interior.