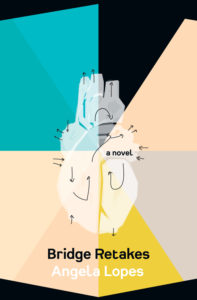 Re-reading A Lover’s Discourse in 2017, it’s hard not to consider how Roland Barthes’ impatient Proustian temperament in love might stand to update. Surely Barthes would be hitting ‘refresh’ incessantly, texting with ‘Read’ receipts on, sitting on his hands.“The lover’s fatal identity is precisely this,” Barthes writes of himself: “I am the one who waits.” There are certain spatio-temporal requirements of cultivated heartsick, and Barthesian fever has to do with distance-in-proximity. But what happens to this genre of devotional in the millennium of email and text message? Separation is not only nervous-making but spiritualizing, at least where it impedes physical love. And much of today’s communications technology both banishes and preserves separation—“keep in touch” an improbable taunt.

Bridge Retakes by Angela Lopes is a poet’s novel of fidelity and distance, responding to the categorical angst of being separate-in-love. Evoking the heartsick psychosomatics of Elizabeth Smart, but written in a language less psalmic and more intimate, Lopes’ debut follows the intercontinental courtship of Phila and Zé, spanning Winnipeg, Canada to São Paulo, Brazil, from an experiment in online dating to the commencement of a family in precarity. There are naught but differences between these two lovers, at first and throughout their relationship—in taste, culture, residence, gender.

Most importantly, or perhaps correspondingly, “Zé and Phila differ grandly with their sense of time.” When Zé is incommunicado for a spell, coping with his own obsessive feelings in isolation, Phila’s desire grows more ardent still. These episodes are painful and bewildering—“Ignoring someone is one of the oldest forms of punishment”—but no cause for a moment’s doubt. Phila pines after the future with exactitude: “Every reality for me is how I imagine it, it gets patient, it gets radiant,” she writes with surety. Barthes would recognize their pangs of absence: “Phila thinks about Zé almost all the time, checking his WhatsApp online status. Zé has thoughts of all the men who must be adoring her at present moments, and pangs of thoughts of her reactions hurt him. He knows of men who have died of jealousy.”

Can there be such a thing as long-distance l’amour fou? Lopes seems to answer affirmatively, but that affirmation tarries with the difficulty of any such endeavour: “Who can enter into a relationship of love they don’t get to attend?” Geography only exacerbates the stakes of love more generally. Real separation, however, does not suit de facto separateness; and obstacles to happiness are irrecuperable as metaphors.

The eponymous bridge becomes an icon of the necessary work of knowing another being. “The bridge opens to ideal as real,” an epigram asserts, affirming the integrity of the bodies it would span whilst binding them. Here sentences are bridges: a thought concluding one chapter reappears to begin the next, thoughts abutting like bodies in amorous transit. A wonderful thing about the long-distance romance novel is that it may forthrightly, unfashionably, resuscitate the tropes of courtly love—distance and proscription driving adoration—which Lopes does with religious devotion, preserving fervent secrecy: “Don’t tell anyone about this clandestine drift of thought while at work.”

Though the novel jumps between perspectives, heartsick cannot be symmetrized, and it is Phila, whose name echoes love, whose desire becomes the reader’s own. Zé is frustrating at turns, withholding of family, reticent to share space, whilst Phila crosses oceans. This mobility indexes a cultural and economic gulf that compounds anxieties attendant upon both lover’s stations: “The stress of tomorrow, we’re not sure if we’ll lose our job. But we will never lose each other.”

Love in the end entails distributing these stresses, an effortful relating: and this story provisionally ends with Phila and Zé asserting constancy amid a thronging public, their intensity of feeling exceeding boundaried being and conveying them to the life of whatever city. Like the love that it describes, Bridge Retakes is a book that brooks no impossibility, all the more touching for its attention to pragmatic detail. If Lopes takes after Barthes in documenting the “apprenticeship of a certain distance,” we must nonetheless observe that this instructional ends on a reparative, prosocial note, with a laudable Spinozist outburst that could be a class mantra, too: “We are not full of anger. We are not giving up. We are in love with our families. We are not naively happy. We make others happy and because of this, we are happy.”

This is a love story without gothic precedent, in which one can’t help but believe despite the obstacles that make a plot. Open-hearted after the fashion of much work in the New Narrative vein, refusing any easy distinction between poetry and prose, living and writing, thought and feeling, Bridge Retakes is an adrenalized experiment thoroughly worth the time of any feeling reader.

Cam Scott is a poet, critic, and improvising non-musician from Winnipeg, Canada, Treaty One territory. His writing has appeared in The Believer, 3:AM, Tripwire, The Capilano Review, and many other venues. He performs under the name Cold-catcher and writes in and out of Brooklyn. A visual suite, WRESTLERS, was published in 2017 by Greying Ghost.