You Don’t Know Me, But You Love Me: The Lives of Dick Miller by Caelum Vatnsdal

You Don’t Know Me, But You Love Me: The Lives of Dick Miller by Caelum Vatnsdal 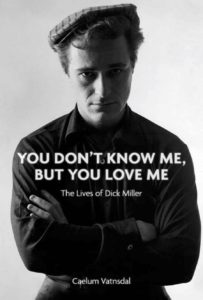 When you watch a lot of movies, you likely start to recognize certain faces.

Not the stars, who are familiar figures in the world outside of the screen—but the people in the background and around the edges of the story. Supporting players with maybe a line or two. While the stars dominate, these often unnamed characters give the movies texture; they flesh out the imaginary worlds up there on screen, and their presence may even provide greater pleasure for the viewer than the bigger names in the foreground.

Some of these bit players remain familiar but anonymous throughout their careers. But others attain a kind of celebrity themselves, as cult figures with a fan base who seek out their appearances regardless of what they might be in. And some become legends in their own right.

One such is Dick Miller, an actor who has seldom had a major role even in the low budget domain within which he has spent most of his sixty-year career. Miller has almost two hundred credits listed on IMDb, many of which represent the work of a day player—someone who comes to set in the midst of a shoot to play one or maybe two brief scenes and then departs. And yet, a good number of those scenes stand out as some of the most distinctive moments in the movies in which they occur. As the owner of the gun shop where Arnold Schwarzenegger stocks up on weaponry in The Terminator (1984) or the occult bookstore owner who offers advice on dealing with werewolves in The Howling (1981), Miller is on screen for barely more than a minute in each film, but in that brief time he leaves an indelible impression; we can imagine a life story just from his easy-going, matter-of-fact delivery of a few lines spoken while deftly handling props with natural, unfussy aplomb.

I can’t say when I first saw Dick Miller on screen, but I can definitely point to the moment when I first clearly became aware of him and his particular qualities as an actor—that was the first time I saw Joe Dante’s The Howling in 1981. I enjoyed the movie’s blend of horror and comedy, I appreciated the remarkable creature effects… but what really stuck with me was Miller’s offhand delivery of a comment about just how hard it is to kill werewolves: “Silver bullets or fire, it’s the only way to get rid of the damn things. They’re worse than cock-a-roaches.”

But that came in the third decade of a career which started in the mid-’50s in movies churned out quickly—and very cheaply—by Roger Corman. In fact, in keeping the budgets down, Corman would have people like Miller turn up in multiple bit parts—sometimes, as in his very first movie, Apache Woman (1955), running the risk of having one of his characters have to kill another on screen. It was Corman, after four years of these small parts, who gave Miller what would become indelibly his signature role: Walter Paisley, a coffee shop busboy who longs to be like the pretentious beatnik artists who patronize the joint. When Walter tries his hand at sculpting, he exhibits no talent at all. But then, having accidentally killed his landlady’s cat, he encases the animal (and the knife still sticking into it) in clay and presents it as a piece of art. Acclaim is instant, but Walter still has no talent and in desperation he embarks on increasingly extreme measures to retain the high opinion of people who now consider him an equal.

That role more than any other set the course for Miller’s subsequent career, although it took more than a decade to really take effect. For some time he soldiered on in small, low budget projects, but then in the 1970s a new batch of filmmakers who had grown up on Corman movies began to seek him out. Joe Dante, Allan Arkush, Jonathan Kaplan, even Martin Scorsese remembered the impression he had made on them, and they came looking for him… never for big roles, but for signature cameos (quite a few times given the name Walter Paisley as a kind of good luck charm). And through it all, Miller remained a low-key, unassuming working stiff with a Bronx accent.

It was this ubiquitous presence of a genuinely likeable character running through movie and television pop culture from the mid-’50s to the 2000s which attracted the interest of Winnipeg author Caelum Vatnsdal (who had himself in fact staged a production of Bucket of Blood for the 1995 Winnipeg Fringe Festival). Following on the heels of the revised edition of his entertaining history of Canadian Horror movies, They Came From Within (2004/2014), Vatnsdal embarked on a project to write Miller’s biography and ended up spending several years researching and extensively interviewing for what has now been released as You Don’t Know Me, But You Love Me: The Lives of Dick Miller (Arbeiter Ring Publishing, 367pp).

We tend to think we know performers whose work we’re familiar with; popular culture gives us an illusion of personal connection. But according to Vatnsdal’s account, the real Dick Miller is very much like the persona we see in the movies. He’s a likeable working stiff who approaches every situation without surprise or drama, whether he’s faced with werewolves, killer robots, high school kids or jazz musicians played by Robert DeNiro. This makes the second half of the book less interesting than the first, as it becomes almost a catalogue of Miller’s film roles with a smattering of life details woven in—his marriage, fatherhood, money worries and, as he grows older, various health problems.

What really engages in this engaging book is the rich account of Miller’s journey to the screen. A Jewish kid born in the Bronx in 1928, he hung out with a group of friends many of whom also ended up in showbiz—musicians, music business executives, actors (Miller and his friends chipped in enough cash for a young Steve McQueen to make a cross country trip to Hollywood and eventual stardom). Miller was a natural performer from an early age, willing to break into song and dance at any opportunity. His first paid gig was at age nine on vacation in the Catskills when the hotel’s weekend entertainment failed to show up and the manager, who had heard Miller singing in the lobby, asked if he’d go on to fill in. “Do I get paid?’ Miller asked, and he was.

In his teens, he moved with his family to the West Coast for a while, talked himself into a higher grade at Hollywood High (though he was found out towards the end of the year and demoted), then moved back to New York. He missed the war, but joined the Navy at seventeen, soon discovering that any potential adventure was mitigated by his innate dislike of authority. Back in civilian life, he tried a few regular jobs, and contemplated a career in upholstery, but being a stock boy at Saks Fifth Avenue convinced him that working life wasn’t for him.

Miller could play an instrument—he eventually dropped the guitar and settled on drums—and that led obliquely to a gig carrying instruments for bandleader Bobby Sherwood from club to club and radio and television studios. On one memorable occasion, he even got to sit in with Thelonious Monk when the drummer disappeared between sets and someone asked if there was anyone in the house who could play drums. Although the job of band boy wasn’t terribly appealing, it did open some doors, and Miller discovered he had a talent for writing skits for late night TV shows. Although he occasionally also performed, he thought of himself as a writer, which is how, when he was back in Los Angeles a few years later, he first introduced himself to Roger Corman when he accompanied a friend to Corman’s office. Corman’s response was “Writers I’ve got, I need actors.” “So I’m an actor,” Miller replied and the rest, as they say, is history.

Vatnsdal approaches his subject with affectionate humour; he writes as a fan, but one with a fine eye for the telling detail and a novelist’s skill in crafting illuminating anecdotes. Until reading this book, my knowledge of Miller was pretty much limited to what I’d seen over the years on screen, so the account of Miller’s life prior to the start of his movie career comes as a revelation. Miller has been a visible presence in my movie-viewing for decades, but here I discover that while he loves the work, he’s never had any driving ambition. In fact, he describes himself as lazy, and would rather spend his time hanging out with friends at his favourite haunts—the famous Schwab’s drug store until it closed in 1983, where he mingled with the whole range of movie people from the lowliest to the most famous.

But despite this casual attitude to his career, those who have worked with him describe him as a consummate professional, an actor who always arrives fully prepared and contributes far more than his often very small roles call for.

Vatnsdal’s witty rendering of Dick Miller’s life story is as charming as the man we see up on screen, the details of that life as entertaining as the roles Miller has breathed so much life into.

Kenneth George Godwin is a writer and occasional filmmaker who blogs obsessively about film on his website, Cagey Films.