There are many ways to die while travelling in Peru

There are many ways to die while travelling in Peru 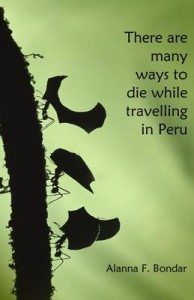 The main difference between travellers of old and today’s wanderers is that the former did not have to travel far from home to find themselves in a truly alien and dangerous territory teeming with shadows and tricksters. One could either perish there or overcome real and/or mythical monsters and come home with treasure or some other proof of valour and cleverness. A strictly modern challenge is to actually find a place that has not been colonized or surveyed to death by our civilization’s agents.

The heroine of There are many ways to die while travelling in Peru chooses to travel to this particular country in response to her boyfriend’s request to pick an exotic place that is “cheap and we can suffer/get outside ourselves” (9). She thinks Peru might be one of the few places she can enter with an imagination relatively free of stereotypes created by Hollywood, Kurt Vonnegut or the Coca-Cola Co., just to name a few.

So how does one write about a trip where guides make sure adventure is served in safe doses, but which is nevertheless a non-stop shock to the system? The author alerts her readers at the outset that she is aware of the difficulty, especially now that she suspects Peru may exist only as a “conspiracy theory–an elaborate adventure travel capitalist venture created by the Peruvian government and sponsored, supposedly and not surprisingly, by ****  ****” (8).

Tour guides may cushion one’s landing in a landscape so foreign it might as well be another planet, but they cannot totally shield their charges. Our narrator finds herself inside what to her feels like AlloSphere’s three-storey cube, one of the largest echoless chambers in the world. Nothing she brings with her, not even her familiarity with Ontario’s northern forest, where she is not afraid of walking in the dark, applies to what she finds in the Amazon jungle. Altitude sickness is a very real and serious hurdle, whether one is travelling solo or with others. So are humidity and heat, which bring on an itchy jungle rash, bugs that find flesh in spite of layers of mosquito netting and Deet, super-sized rats, snakes, jaguars, parasites. Fear is what keeps people like me from venturing into the jungle, preferring a virtual one. Fear is what the narrator has to face day and night.

The title of this book, which the publisher describes as poetic-narrative/narrative-poetry, is brilliant, and the main reason my hand reached for it. The reason I was not discouraged by the first four pages, where I found myself addressed as dear reader at least seven times, is that I have been dreaming of going to Peru since my early twenties. It has taken on mythical proportions in my mind, enhanced no doubt by such works as Pablo Neruda’s The Heights of Macchu Picchu, a poem in which death figures prominently and which I first read at an impressionable age. Bondar quotes from it, in the original Spanish.

The form chosen by the author is a mixture of event-driven narrative and interior monologue, grammatically correct sentences and word or sound bursts. Facts, often ironic commentary, a generous sprinkling of Spanish words or phrases throughout, are delivered mostly in long lines, broken with single, double, or triple slashes.

Convoluted syntax and narrative point of view that alternates between first and third person make this a challenging read. I found the book worked best in places where the author concentrated on the personal and particular, exploring her fear, her physical discomfort and psychological distress, and her small victories, in ways that allowed me to respond to them emotionally and intellectually rather than spending so much of my time untangling. ♦

Anna Mioduchowska’s poems, translations, stories, essays and book reviews have appeared in anthologies, literary journals, newspapers, on buses, and have aired on the radio. In-Between Season, a poetry collection, was published by Rowan Books. Eyeing the Magpie, a collection of poetry and art, was published in collaboration with four fellow poets.

Buy There are many ways to die while travelling in Peru at McNally Robinson Booksellers.