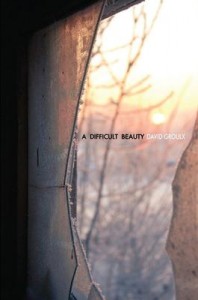 An accomplished poet with several books of poetry, David Groulx presents us with a new collection, A Difficult Beauty. And with it, he gives us a glimpse into the physical, emotional, and spiritual losses experienced by the Aboriginal peoples at the hands of white colonials. His compilation covers the theme of subjugation that began centuries ago but still remains, the results of this bigotry seen in everyday occurrences well illustrated in the book. Groulx’s volume is full of yearnings, pain, and frustration; the writing is honest, lucid, and relentless in its efforts to understand the injustices heaped upon an unsuspecting but thriving culture.

The first poem in the book, “Widening the Highway on the Rez,” speaks of a highway being built “so that people can get by faster” (12). This “progress” brings disruption to the land and to the people:

The selection of the word “silence” is unusual and brings home the revelation that not only does this advancement bring changes to the land by ripping it apart and covering it with pavement, but it also culminates in the disappearance of a way of life. The change is so oppressive that silence has no choice but to flee.

As well as the invasion of the land, Groulx speaks of the assault upon men’s and women’s lives resulting in their subsequent ruin. In the poem “Emptying the Graveyard,” the poet provides tough yet powerful images: “a few drunks following / what was left of the moon” and “the hookers wander home / their wallets full / as their mouths were” (18). The vignettes suggest that once the colonials debased the Aboriginals of their culture, they then created a new one incorporating the “drunken Indian” and the “whore,” images they used to their own advantage. Once established, this attitude dominates to this day, thus furthering intolerance. The sad conclusion is that the poet’s persona also sees his people in this light but feels powerless to do or say anything, and the poem ends with the lines “we are like cockroaches / scurrying before the sun” (18). It is as if the people have become less than human.

“Blueberry Season” depicts a painting of a family going to pick blueberries so that they can collect wages from a storekeeper who has hired them. The outing sounds like an ordinary event, pleasant and full of promise for the day. What is telling in Groulx’s rendition is that “My grandmother, my aunts and uncles / will live on flour, tea and lard” while “The storekeeper / will sell the blueberries to Canadian and American tourists,” more evidence of exploitation which can only result in spiritual as well as physical loss. (85)

Tender moments do occur. In “Dancing with My Father,” a father tries to be a champion to his son. Groulx writes, “I could not tell which / I could not discern which way we were going” but it didn’t matter; the child was with his father. Then the father falters and we realize he is drunk:

your hand slips
I tumble down
like a boxer
against the ropes. (41)

The father wants to show affection towards his son but falls short. This poignant portrait reiterates the despondency of a defeated culture. It is also a metaphor for Aboriginal traditions being stifled by white society, resembling a schoolyard bully’s antics.

Many of the poems are raw and contain expletives, an indication of the frustration and anger felt by a people dispossessed by a patriarchal society, a reminder that the people feel privation even in today’s world. “Security Guard” Groulx presents a chilling account of a young Aboriginal entering a post office to purchase stamps:

maybe he watches me
because I have long hair
because of the ring in my nose
because I am young
for anything but being Indian. (89)

It is a sobering picture of a society harbouring racism, and as long as that prejudice continues reconciliation cannot take place.

There are healing poems, in which the poet finds solace in Aboriginal history, in its memories. The poem “Sweat” speaks of the spirits of the grandfathers and the grandmothers, and how calling on them will help the healing of the people: “Open the door / TO ALL MY RELATIVES!” In the last stanza the poet extends an invitation:

I like to think that the poet is offering white society a seat at the gathering, a place where healing can begin for all. ♦