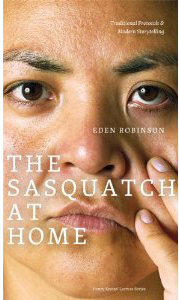 Heiltsuk/Haisla/Canadian writer Eden Robinson is a storyteller who bears witness and educates as she entertains. Like her award-winning fiction, the stories in The Sasquatch at Home: Traditional Protocols & Modern Storytelling sparkle with Robinson’s self-deprecating humour as she tells of who she is as an individual and of how she is connected.

Robinson exemplifies the melding of tradition and today. She comes from a mixed marriage, of Heiltsuk mother and Haisla father, two matrilineal cultures. Status is bestowed as a birthright; names and positions are passed down in the presence of witnesses at community feasts, potlatches. Her unconventional family broke with tradition and named their daughters “across clans” (from the father’s side rather than the mother’s side) (4). Generations before, her great-grandfather, an English-born missionary, had married a Native woman. The British Columbia in which Robinson grew up is infused with the pop culture of America and Europe.

The Sasquatch at Home Part 1 is introduced with citations from two anthropologists from the 1930s. An American, Ronald Olson, reports: “They say the Haihais and Heiltsuk (Bella Bella) ‘don’t know how to marry’ because they originated from a girl who ‘married’ a dog” (1). A Russian, Ivan Lopatin, comments upon how surprised he was to learn that the Haisla do so much business with Eastern Canadian department stores through the mail (3). Myth and reality. In this section Robinson tells how she spent award money by flying with her mother to Graceland.

You should not go to Graceland without an Elvis fan. It’s like Christmas without kids—you lose that sense of wonder. . . . [A]s we walked slowly through the house and she touched the walls, everything had a story, a history. In each story was everything she valued and loved and wanted me to remember and carry with me.
This is nusa. (12)

Applying the traditional concept to a contemporary adventure shows that both culture and cultural transmission are alive and well. This is a model for both curriculum development and cross-cultural communication. Identify the underlying values. Figure out not the “what” but the “why” and the “how” of teaching and learning. Help us see how everything is connected.

Part 2 cites Haisla elders speaking of “nuyem,” protocol. They caution both that some things cannot be shared (as history shows whatever is shared is suppressed by the missionaries) (13) and also that what is not recorded will be lost (15). Unhappy past experience and unfortunate future prediction. How can the two be combined? Does the conundrum give each storyteller permission to make his or her own decision? Robinson’s story in this section speaks of oolichan fishing, processing the grease, trading the precious commodity. In the past, no one would miss the oolichan run, even if the fish arrived during a wedding. “As soon as [the chief] said it was okay, the bride hiked up her wedding gown and waded into the river” (19). She points out that the cost of fishing now makes shopping at the mall more economical, and that pollution has almost destroyed the fishery. But, “If the oolichans don’t return to our rivers, we lose more than a species. We lose a connection with our history, a thread of tradition that ties us to this particular piece of the Earth, that ties our ancestors to our children” (23). The what, the where, the how, and the why.

Part 3 cites botanical references to traditional medicinal plants and again early ethnographic references to the Haisla people’s “Wild Man of the Woods,” Bekwis (29), or b’gwus, known as Sasquatch farther south (from the Halkomelem language) and Bigfoot across the line. Robinson’s stories here reveal her challenges when writing her Giller Prize and Governor-General’s Award–nominated first novel, Monkey Beach – how “Haisla copyright” and storytelling protocol dictated what she could include. Certain clan stories “are owned by either individuals or families and require permission and a feast in order to be published” (31), and how feasts are very expensive to present. She was not permitted to write about the rituals and dances that happen at the potlatch, although someone told her that writing about the audience, what the crowd was doing, would be permitted. She asks her father to take her to Monkey Beach for research and on the journey he recounts stories he eavesdropped upon years before. “I could point to any mountain, any river or any rocky shoreline and he knew the history” (40). He also explains his understanding of Sasquatch to her, that they are people banished from the villages, living in exile, self-sufficient, seeking companionship, and that the reason they see no Sasquatch on their visit to the beach is probably because: “They must be at home,” Dad says with a smile, “writing” (41, my italics).

Robinson sees and shows how culture is not something frozen in the past, that it embraces shopping and mail order and outboard motors and McDonald’s as much as it does medicinal plants, poles, and potlatches. That the processing is the same, whether the stories involve Elvis, his mother, and Graceland, or Sasquatch and oolichan. If I were minister of culture or of education, I would recommend this book as compulsory reading for every Canadian; it’s about who we are and how we know.

The Sasquatch at Home: Traditional Protocols & Modern Storytelling originated as the Henry Kreisel Lecture at the Canadian Literature Centre, Edmonton, in March, 2010. p