Hordes of Writing by Chus Pato; translated by Erín Moure

Hordes of Writing by Chus Pato; translated by Erín Moure 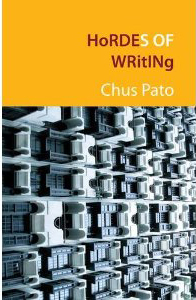 Erín Moure’s translating career can be considered on two planes. The first, the one she began in 2000 in collaboration with Robert Majzels, was the translation of domestic works which, in this case, involved Nicole Brossard’s Installations. Two further translations of Brossard’s works, with Majzels as collaborator, appeared – Museum of Bone and Water (Musée de l’os et de l’eau) in 2003 and Notebook of Roses and Civilization (Cahier de roses & de civilisation) in 2007 – before Moure turned her sights on a book by another Québécoise poet, Louise Dupré, Just Like Her (Tout comme elle). Moure’s second plane, the translation of international works, began in 2001 with Sheep’s Vigil by a Fervent Person, her translation from the Portuguese of Fernando Pessoa / Alberto Caeiro’s O Guardador de Rebanhos. Moure next focused on a small autonomous region in Spain’s northwest – Galicia – where she discovered a poet writing in the Galician language (which Franco attempted to eliminate). Charenton appeared in 2007 and m-Talá in 2009. Hordes of Writing, then, is Moure’s third translation of a work by Chus Pato. It was simultaneously published in England by Shearsman Books.

Unlike the early Chus Pato translations, Moure begins this book with a preface in which she sets out Pato’s poetics:

The poems translated here are those of Hordes of Writing, the third volume in her projected pentalogy Method, in which she refashions the way we think of the possibilities of poetic text, of words, bodies, political and literary space, and of the construction of ourselves as individual, community, nation, world. (7)

We see these poetics in play from the outset when we read:

from close up the treetop is circular, spongiform, and the trunk
an umbilical cord that links us acoustically to the core of the planet

we transmigrate to a branch, like twins, so that we’ll be oak or
placenta, which means we’re in the midst of it or La connaissance
infinite

Note how that last line unites the reference to ‘oak or placenta.’

This poem is followed by a new section beginning with a quote from Friedrich Schlegel:

Poetry is a republican discourse: speech that is its own law and own purpose, and in which all parts are free citizens who have the right to speak their minds so as to come to agreement. (13)

It is easy to see how this quote would appeal to someone in Pato’s position, considering that Franco, himself a Galician, during the Spanish Civil War suppressed both the people and the language of the area, which had been granted autonomy during the prior Second Spanish Republic. It is also easy to see how this quote would have coloured Pato’s poetics.
Thermidor (first episode) takes us into the beginning of a journey

. . . on the sled of one of her woman ancestors she crossed
the Rhine, frozen, and continued on foot along Imperial trails toward the country of great forests // heading always toward . . .
. . . the icy passes of the Pyrenees, the Cretaceous
nation of the Basques, the Cantabrian cordillera and the Navia
River (17)

which leads us to the Suevi, a Germanic tribe, who founded the Suebic Kingdom of Galicia in about 406 C.E.

But the past and the present merge into one and the hero of the past is presented as a present image:

It hits her right in mid-crosswalk, after deciding to walk from
bus stop to hotel, she realizes she’s too laden with baggage; (19)

The reader can’t help wondering whether the ‘baggage’ is merely ‘luggage.’ “Her” mind drifts toward loss:

she’d have liked to have dedicated a large part of her life to the
cultivation of pleasure, which gave her the idea of setting up, in
the way of the monks of Ménilmontant, Fourierist phalansteries
or the city of New Harmony, utopian-revolutionary harems or
bordellos where a community of women and men willingly reach
the ideal of a phratria of bodies (21)

but, instead, her cultivation is dedicated to an evolving of language towards a poetics and the opening of unique literary spaces where “the literary works of the Marquis [de Sade] (one of her bedtime favourites) could only be understood as another inventory and as the writer’s attempt to make bearable the dark night of the world” (22).

We, the readers, then face the question whether that dark night of the world is the reading of the Marquis between covers “or her never fatal attraction to her currently uprooted, jailed or dead comrades . . . in which Ophelia was brutally run over when she tried to identify her brother amid the corpses of the victims of the latest bombardment” (24), which take us back to Franco and the Spanish Civil War as read through a combination of Hamlet and the Marquis de Sade.

It is readily understandable why Pato has become a favourite of Erín Moure’s. This blurring of boundaries leads to the question: Is this poetry? fiction? history? Is Pato the Galician equivalent of Anne Carson (read Carson’s Nox in parallel with Pato)? More than anything, Pato is to poetry what Michel Houellebecq is to the French novel – a pastiche of unexpected entries that form a mosaic of fractured meaning in a Lacanian landscape in which, at the end of her first section, she postulates: “Maybe the biggest silence is me (the narrator, she), a solitary thinking voice that never addresses anyone” compelling the reader, by direct inquiry, to respond: “Reader, will you read my enchained body, pomegranate or lyrics out loud? recite to me in your voice? ink, shadow of grain or perhaps a husband of mine, Hades, in the foggy cellars of the planet” (29). How will you respond to this entreaty? to the others posed throughout this work? This is not something you have read before. It is something you will want to read again . . . and again . . . and again. p

John Herbert Cunningham is a Winnipeg writer. He reviews poetry in Canada for The Malahat Review, Arc, The Antigonish Review, The Fiddlehead and The Danforth Review, in the U.S. for Quarterly Conversations, Rain Taxi, Rattle, Big Bridge and Galatea Revisits, and in Australia for Jacket.