Nuala: A Fable by Kimmy Beach

Nuala: A Fable by Kimmy Beach 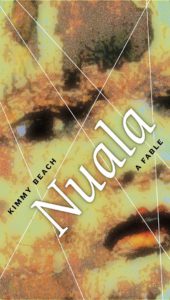 The flyer for Kimmy Beach’s beautifully produced novella Nuala advertises a dystopian future troubled with love, possessiveness, and envy—it lives up to the pitch. But its subtitle, A Fable, points to more. The fable leaves the book open and inscrutable while simultaneously prodding readers to interpret it, as we tend to do with fables. We are perplexed yet meant to decipher that perplexity. This shift of responsibility to the reader seems to be its moral too.

Nuala will trouble readers in the turmoil of CanLit’s dumpster fire, to borrow Alicia Elliott’s apt image. Surrounded by tales of predatory relationships and abuse in CanLit, the reader of the fable today might notice the novella’s origins in The Trickster and the Muse Workshop in 2012, a site of nurture and mentorship. Nurture and mentorship become key themes. The temptation is then to take that creative muse as the eponymous Nuala herself, a giant wooden puppet. She has a demiurge for a Teacher-Servant, and he slowly becomes a cruelly jealous teacher as his student and (in his eyes) ingénue finds greater favour from the muse. What teacher wouldn’t struggle in service to the creative muse? How would that teacher respond to a student discovering that muse and flourishing as he wanes? When does the intimacy of that relationship become toxic if it wasn’t always so?

The control over love and inspiration, and domination by regulating access to Nuala, emerge slowly as the crux of the futuristic narrative after its blissful opening. Nuala, a conscious but inanimate giant, bestows her favour on Teacher-Servant, who communicates her thoughts to all the other servants involved in carrying out her wishes. Tensions emerge from this dystopian scenario familiar to anyone in teaching or creative work. Some workers have tangible results while others, the Teacher-Servant for Beach, have mentally-taxing labour with unclear purposes: work that isolates them but for which they are resented because of relative freedom from physical labour. When Nuala calls Teacher-Servant in a form of telepathy, the language is of inspiration and of penetration by inspiration. His task, of course, is then to communicate that experience to those who can never have it—they are the other servants who care for Nuala, like so many copyeditors, typesetters, booksellers, couriers, and clerks care for books (and readers too). Add the image of Nuala as a giant puppet held by the wires of the puppet-masters, cables connecting everyone together, and agency becomes an inevitable part of this relationship. Both the puppet and the servants pulling her strings are held in place by Teacher-Servant who negotiates between the two as the eye through which all threads pass. It’s surreal cognitive estrangement at its best.

This may seem like just one possible reading of the fable. It is. And it is just one of many available. The book demands this of each reader. Of all the things that Nuala is, it is a fable first. Where Beach’s stunning previous book from the University of Alberta Press, The Last Temptation of Bond, satirizes (or Fabulates around) toxic masculinity, Nuala: A Fable presses hard on how her Teacher-Servant works as the medium between the creative giant and the public at large, and the exclusivity of being that obligatory passage point. Instead of Bond’s sweaty, alcoholic machismo, Beach shows Teacher-Servant’s growing cruelty to his love and jealousy over other servants who might find their own ways to bypass him. The abjection of his turn to deceit, alcoholism, and manipulation are made more human by his fearfulness, loneliness, and inability to meet Nuala’s demands as she blocks him from sleep and drives him along her own path, not his.

However, this fable, if it has a moral, reminds the reader that the failing human struggling for control as his muse loses her love for him, is nonetheless manipulating love just as much as he is manipulated. As a teacher, Teacher-Servant’s position of trust is ripe for abuse. He imagines the love of another servant seeking access to Nuala, and then performing that love at him becomes her only way of accessing Nuala. The creative writing seminar could look hard at this. It dances close to the abuses burning in CanLit, particularly when Nuala becomes capable of communicating with others, and as the student finds her own relationship without Teacher-Servant as a guide or intermediary. The cruelty of this man in a position of power, controlling language, communication, and words, lashing out as he loses power, is hard not to read anachronistically as a parable. And of course, it isn’t a parable for the dumpster fire, and yet for a reader today it also is…

Beach’s brilliance is in suggesting so much that sends the reader, in this case this reader, down a committed interpretation while leaving the tale fabulously open to competing ideas and ways of making meaning. Does the reader wander from the chapter “Tree Speak.” into Robert Graves’s tree alphabets and his infolding, twisting muses through the worshipped White Goddess and destroying Black Goddess? The women were, respectively, Laura Riding and Aemelia Laraçuen, both tangled in a torsion of patriarchal authority. It seems inevitable. Yet it’s entirely my own worry, surely projected onto the text. Beach’s book is beautifully open to readers, leaving meaning-making to us rather than, like the Teacher-Servant, putting the author as intermediary. Where Beach insists on the story as fable without a necessary moral, this may actually be its ethical praxis.

The writing at the sentence level and in the structure of each chapter is beautifully crafted. At several points, I couldn’t help but turn back and reread, thinking of a previous moment in an entirely new way. Like any work with an unreliable narrator, we slowly learn to distrust authorial authority, and in doing so free ourselves for reading as its own creative act. If there’s a magic in Nuala, it’s this: that the reader becomes the demiurge and the muse becomes a reader. Beach surprises at every turn, and I’ve already returned to the book to try a new reading. If there was any doubt about Beach’s turn from poetry to prose, this dispels it. A new prose voice in CanLit demands attention, and she deserves it.