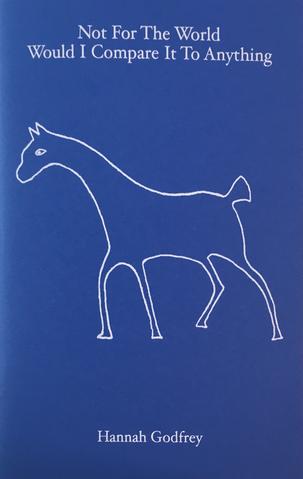 Hannah Godfrey is a formidable storyteller, so much so that even a thoroughly academic dissection of the vagus nerve becomes emotive prose in her chapbook Not For The World Would I Compare It To Anything. The ambitious collection of short stories and essays was published this spring by Parameter Press as part of their Riso duplicator publication project. Godfrey is a writer, interdisciplinary artist, DJ, and designer; the director of the artist-run gallery aceartinc., co-founder of the Flux Gallery and the Cartae Open School; and hosts the weekly storytelling radio spot The MonkeySparrow—all this to say her vitality and versatility push through in this latest project.

In Not For The World Would I Compare It To Anything, Godfrey gracefully negotiates self, solitude, and connection as she moves readers through snapshot journeys and investigations. Her stories invest huge meaning in small moments. By paying careful attention to the time, space, and sensation in which her subjects are situated, Godfrey invites readers to tip fully into their anxieties, desires, and reconciliations.

In “Like Music” a lone hiker, overstimulated by the penetrating call of loons over a secluded lake, becomes immersed in grief. Godfrey is able to leave her subject’s grief loosely defined, and it is all the more relatable for its looseness, because by skillfully immersing the reader in the bodily sensation of loss instead of its superfluous details, we are consumed by grief as we carry it in our own bodies. Our grief is amplified in the chasmic darkness which Godfrey evokes, making space for the body which folds in on itself again and again until, deeming the sensation sufficiently excruciating, Godfrey plucks us from the void, settles us upon the shoreline, and instructs us to wait for the sun to rise.

The destabilizing aloneness that Godfrey establishes in “Like Music” runs through the chapbook’s stories, a recurring and gently stinging reminder of how easily we are found strange in our bodies.

In “Divinities of the Place” our narrator discovers the infinite history of all life—self dissolving into other—in a stampede of reindeer.

The wandering narrator in “The Scent of Peppers” is annoyed by an alley cat that repeatedly brushes against their leg, pulling them from the edge of nostalgic vacuum, until a kick of the cat has them confronted by a stranger with a potent warning not to forget “now time”.

In each of these stories we find the subject at risk of disappearing into themselves yet pulled (sometimes literally kicking and screaming) back into an insistent present. It is this ebb and flow of attention that creates such a strong affective connection between the reader and Godfrey’s subjects, and what makes Godfrey such an effective writer.

The essays which pepper the chapbook position scientific and critical investigations among personal anecdote so that the affective push and pull of the stories are not punctuated by critical reflections but are instead expanded by them. The essays become the liminal betweens in which we have brief pause to unpack her stories and, of course, the betweens are found to be as essentially a place as the stories themselves. As Godfrey asks in “Committing”.

“If I do not accept inbetweenness as something that is part of me, or that has value in and of itself, if I reject it, do I go back to being a passive traveller in my own life, observing my surroundings with strange intensity to stop being lonely?”

Godfrey orients and reorients her readers gently, her explanations are patient and kind, she strikes a skillful balance of detailed description with the generous unknown, and she evokes symbolisms that are powerful in their aching simplicity.

Jennifer Ilse Black is a queer/femme Hungarian settler living, making art, and writing in Winnipeg, Manitoba.  Black’s poetry has been published in the University of Manitoba Feminist and Queer Review and PaperWait.  Her experimental novel, Small Predators, was published in spring 2018 with Arbieter Ring Publishing.