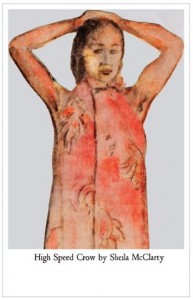 High Speed Crow is a first collection of short stories by Manitoba writer Sheila McClarty. It was the winner of the Eileen McTavish Sykes Award for Best First Book at the 2011 Manitoba Book Awards. As such, it deserved my attention, and I am happy I read it. This is an author whom I’ll watch for again.

The book has no overall theme, though several stories include marriages and relationships at a critical moment. It is, rather, a general collection with a variety of voices and ideas. Stories include both male and female voices, young adults and older ones, with both first- and third-person stories − ten in all, ranging from a mere seven pages to just under twenty.

The first story, “Stolen,” captures the reader’s attention by its unusual setting, much of the action taking place in a horse stable. It is an inventive, suspenseful story with the protagonist a young woman who does artificial insemination of horses. She risks everything to steal a birthday present for her unappreciative boyfriend. City readers might have something to learn here!

Many of the stories have present-day settings, but “The Government Ditch” is set in 1965. It relates a tale of three military wives preparing for the return of their husbands. The men have been away all summer and the women are trying to prepare a little excitement for the men’s return − but get more than they bargain for.

A second story with an earlier setting is “After the Execution Party,” which takes place on Coney Island in 1903 and is based on an actual historical event. A circus elephant, Topsy, had killed three people, one of them an abusive trainer who tried to get the elephant to eat a lighted cigarette. It was decided that the animal should be executed, and the deed was carried out by electrocution, with Thomas Edison actually recording it. Sheila McClarty takes this event and writes an inventive story about the various circus people around Topsy and how they might have been affected by it. The ending is unexpected.

Most of the stories have Manitoba settings. Several are set in Winnipeg, including such spots as the Leo Mol Sculpture Park, which is used in the story “Europa,” about a widowed senior named Joan whose son considers her a “constant worry.” At first we wonder why he feels this way, but later we start to understand. Other stories mention rural spots such as Winnipeg Beach and the Viking Statue at Gimli.

One of the best stories is “The Truth About Lies,” about the suicide of a small-town postmistress, who has thrown herself and her possessions off the town bridge into the river. The format is intriguing, with several viewpoints, and with each new voice the reader learns a little more about the event and what precipitated it.

Another story with different viewpoints is “A German Shepherd, a Natural Redhead and a Yellow Scarf.” This begins from the viewpoint of a psychiatrist, Dr. Earhardt, who is close to the end of his career, but still carries out therapy with various patients with anxiety disorder. We listen in on his sessions with three female patients, and then switch to the viewpoint of each woman in turn, an interesting technique. In this one short story both author and reader worm their way into the lives of four different, though interwoven, characters. The successful way in which this is done is indicative of the author’s skill.

I enjoyed most of the stories in High Speed Crow, and wished the collection had been longer. The stories are written with a matter-of-fact skill that pulls the reader along. The characters, with their strengths and weaknesses, come alive in just a few pages – not one of them a simple black or white.

Several of the stories have been previously published, in The Fiddlehead and The Antigonish Review. One was the winner of the Sheldon Currie Fiction Contest in 2009.
McClarty lives outside Oakbank, Manitoba. p

Donna Firby Gamache is a writer/retired teacher from MacGregor, Manitoba. Her newest work is Sarah: A New Beginning, a novel for children, loosely based on the coming of her great-grandparents to Canada in 1891.