Her Voice, Her Century: Four Plays About Daring Women

Her Voice, Her Century: Four Plays About Daring Women 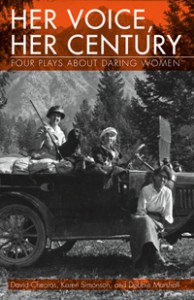 Reading plays in book form is always a different process from seeing them on stage. They become literature and need to engage without the visual and oral elements of a stage production. The book form should work well for this collection, since much of the material comes from the Provincial Archives of Alberta and is historical as well as literary in nature. Much of the text within the plays comes from letters, newspaper articles, and transcripts. Despite this, some of the pieces in the collection did not keep my attention as a reader. In evaluating whether this was due to the need to see the pieces on stage to be fully engaged, it became clear that even from a theatrical perspective some of the pieces are stronger than others.

Letters from Battle River: The Adventures of Dr. Mary Percy Jackson is the first play in the collection. It tells the story of Mary Percy Jackson, who came from England and was sent by the Alberta government’s district medical officer to the Battle River district. It is a one-woman show based on Jackson’s actual correspondence housed at the Provincial Archives of Alberta. The play was the first in a series created with the support of and from materials in the archives. It was originally produced in 2007, with the performance of text from her correspondence highlighted with slides of photos from the period.

In their introduction, authors David Cheoros and Karen Simonson outline how they brought different things to the piece. As a historian, Simonson states, “I don’t mind if the bits of the story occasionally fit together oddly. What’s important is to be accurate, to represent the words and thoughts of our subjects and their time periods” (4). Cheoros, on the other hand, was concerned about the narrative and creating a kind of story arc. Although it is interesting to get a glimpse into the challenges of a pioneer doctor, and in particular a female doctor, the piece does end up as more of an historical snapshot rather than a dramatic creation. It is heavy on narrative, with very little dramatic action to carry it through. Even when components of her personal story draw you in, the journal entries are so brief that there is no follow-through. Several ideas are introduced and then dropped. Heavy on information, the piece provides some great educational value but not great drama. More photos in the book to reflect the production and to give the reader a sense of the visuals would have been useful, since the slides for each scene are listed in the script but only a handful appear in print. I was interested in the story of Dr. Mary Percy Jackson, but the structure of the piece did not draw me in to it.

The second play, The Unmarried Wife: The Passion and Photography of Gladys Reeves and Ernest Brown, has more dramatic action due to the interaction of characters and fully realized story line. However, it is again very narrative and heavy on information.

As the two talk, the story uses flashbacks to show the developing relationship between Reeves and Ernest Brown, and how they ended up living as husband and wife. The play premiered in 2009, with two actors playing the four roles. The story itself is interesting and both characters’ contributions to archiving the history of the region are noteworthy. The play is most engaging in the scenes between Gladys Reeves and Alan Brown, where there is strong subtext and conflict. However, at times the accomplishments of Brown, rather than those of Reeves, seem to be more the focus of the play, despite the collection’s being about “daring women.”

The standout is the third play, Firing Lines: Journalist Beatrice Nasmyth Covers the First World War. This piece is the only one in the collection written by Debbie Marshall, with the other three plays being created by the aforementioned David Cheoros and Karen Simonson. Nasmyth was a reporter with Vancouver’s Daily Province from 1910 to 1914 and she was sent to Britain to cover the First World War. She was the publicity secretary for the Alberta agent general and the campaign manager for Nursing Sister Roberta MacAdams (one of the first two women elected to a legislature in the British Empire).

The play is adapted from letters the journalist sent home to her parents and over 100 articles she wrote. The set-up is that Nasmyth, at the age of 54, has been asked to speak for a new group of women war correspondents preparing to cover World War II. Gladys Arnold represents this next generation and questions Nasmyth, often asking the question the playwright herself wishes she could have asked. The exchange between these two characters makes for strong dramatic action and really engages the audience. It also allows for the information to come out naturally as Nasmyth tries to counter the assumptions being made by Arnold. The play then uses flashbacks to show a younger Nasmyth on stage dramatizing the events. The play was originally performed in 2011 with a cast of two women and one male, with a lot of doubling-up of character roles.

The script has a real drive and is engaging even on the printed page. The historical information is interesting, as is the way it is presented. The one thing that doesn’t feel quite authentic is the level of Arnold’s animosity towards Beatrice. The reason for it is unclear, and Arnold’s change of heart seems a bit sudden. However, the ending is strong and brings the story full circle.

The final piece doesn’t quite fit in terms of being about a “daring” woman, as it is as much a story about the male character, but interesting theatrical techniques are used to make it a strong dramatic piece and an engaging read. Respecting the Action for Seduction: The Brownlee Affair tells the story of former Alberta premier John Edward Brownlee and his suspected affair with Vivian MacMillan. The two met in 1930 while Brownlee was campaigning, when MacMillan was only 17. She moved to Edmonton and worked in close proximity to Brownlee and was also a regular guest to his home for family dinners. In 1933 MacMillan and her father formally accused Brownlee of seduction and the case went to trial in 1934. The play is situated a few years later as Brownlee and MacMillan meet outside of court where a judge is deciding if Brownlee should pay MacMillan’s court costs from the original trial.

As the two talk, the audience is able to see, through flashbacks, how the past events unfolded. What is unique about the piece, however, is that there are two accounts of the story, with the play using trial transcripts to explore the different versions of what happened. The play debuted in 2008 with two actors, and although it could be performed with a larger cast, having the two actors playing the other roles in each other’s version of events adds an interesting dimension. The action is vivid and can easily be imagined on stage, allowing the reader to see it unfold as a play, lifting the story off the page. The conflict between the characters and their struggle for the truth really engage the reader and in the end a compromised version of what happened is proposed, with much being left up to the reader to decide.

The book successfully captures historical moments through strong female characters. It is exciting to read their stories and to know that a lot of the content consists of their own words. At times, however, particularly in the first two plays, the historical information and educational value outweigh the dramatic context needed for a play. A strong performer could certainly bring the text to life, but from a theatrical perspective this would be a challenge. The second two pieces do manage to successfully combine the historical information with a strong dramatic context, and make for a good read as well as allowing the reader to see how the stories would be brought to life on stage. For those interested in Canadian history, interesting female characters, and documenting the past, the book is certainly worth reading. ♦

Hope McIntyre is the artistic director of Sarasvàti Productions, which also produces FemFest, Winnipeg’s annual festival of plays by women for everyone. She has an MFA in theatre directing (UVIC), a BFA in theatre performance (U of S), and she completed an apprenticeship in performance at ARTTS International in England. She has worked as a director and actor for independent theatre in various Canadian cities and is an award-winning published playwright.