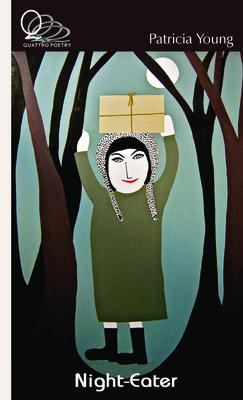 What an odd title for a book of poems. I conjure up a beast, or a fantastic creature like the shadow in Robert Munsch’s children’s story The Dark.

The title poem concerns a woman with an eating disorder that has afflicted her throughout her life. Young focuses on our perceptions. The disorder is upsetting enough to push the woman to self-loathing and to doubt her own sanity. The poem concludes with an image of the naked woman pressing a frozen pie to her breasts while a stranger sitting on the couch stares at her.

Has Young written a poetic notion for getting caught with one’s hand in the cookie jar while one’s pants are dangling around the knees – that is, a poem of guilt and shame?

Hold onto the image and examine what happens in the poem “The Roofers.” Young brings together several disparate nouns and makes them act in concert. To what end I am unsure initially, but remain patient with not knowing. Besides, she makes me comfortable with the extraordinary. Must I have a reason for everything that goes on in the world? “. . . . the neighbour rushes// around his house covering/ windows with sheets of plastic” while the men of the title shove shingles off the poet’s roof. A dead friend and her caddish lover, bottleneck dolphins, a husband concerned with his ability to shelter, sex and spices all make an appearance in the poem, and a reader might be inclined to consider the quote “Sex lies/ at the root of life, and we’ll never/ revere life until we understand/ sex” as the fulcrum to lever this poetic boulder out of the path of life, but I’d caution the reader to take a second, even a third look.

Young is a masterful technician. She masons each brick into place just so. Dolphins and roofers and sex and spice might seem like random hookups, but in a Young poem they aren’t. She thrives on ambiguity and twists while fostering a rapt interest in them in the reader.

Take the poem “Sisyphean.” A boy and his father appear to be cleaning up the beach they walk along each Sunday, carrying a garbage bag to collect the detritus of the sea. It comes to a seesaw:

. . . was the man saying food chain, chemical
pollutant, death of the sea? Or was he avoiding the eye of the one
to whom he’d so carelessly given life: What you got there, Bub –
doll’s head, BB gun, baby’s bootie?

The adverb “carelessly” is simply pitch perfect. The tone of the poem comes across as world weary, but the air propelling the tone is comedic.

Young’s sense of humour is especially perceptible in “Gift from Italy.” The gift is a white linen tablecloth, and the comedy derives from spooning beets over it at a dinner party. A sloppy serve results in a blossoming stain as the embarrassed hostess wants to “fall in love with a wood butcher” and head for the hills. Life’s not that easy, so she opts for the “organic miracle cleaner” that everyone knows isn’t either.

Young shows an honesty toward domesticity that isn’t bitchy or cheesy. What about this description of a newborn: “How like a fat slug./ Or a blind mole, burrowing”? Young’s gift rests in her honesty and indecorous and courageous eye on what’s important in our lives. ♦

Andrew Vaisius is a childcare worker who lives in Morden, Manitoba.