How Festive the Ambulance by Kim Fu

How Festive the Ambulance by Kim Fu 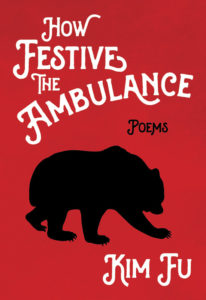 How Festive the Ambulance, Kim Fu’s debut book of poetry, is a startling exploration of the banality of modern life.

With dark and exacting language, Fu dissects life’s excess of moments and uncovers a consistency of destruction and disappointment.

Throughout How Festive the Ambulance, Fu sketches human and mythical characters to showcase the parallels of discontent in both real and imagined worlds. In “The Unicorn Princess”, Fu ironically imagines a unicorn (the standard in make-believe creatures) who desperately attempts to avoid her reality. The unicorn tries on wedding gowns at a bridal shop while bragging about “her imaginary fiancé” and describes her fictional wedding venue by reciting gaudy language from a wedding magazine (15). She revels in going to open houses to “riffle through drawers”, “sniff the sheets”, and “pocket tchotchkes” (15). As Fu masterfully reveals through the juxtaposition of fairy tale and pop culture, the unicorn is a reflection of the strangers’ life she intrudes upon:

She knows these people, as she knows the ones
on the Home & Garden channel:
sledgehammering through walls and revealing
their sodden, infested, but fixable souls. (15)

Fu’s dismal description of women’s roles in the natural world is unsettling. “Salt” tells the story of a young woman who reaches puberty at eighteen and is “preparing, ancestrally, to squat down and bear/fruit” (33). She finds herself “pissing on a stick in a mall bathroom stall/wishing her body were filled with sand” (33). Next, she is on an “anonymous bus/out toward the wasteland”, a metaphor for travelling to an abortion clinic, as she watches “skulls smaller than her palm/and the cracked bones of shapeless girls” (33).

The progression of the young woman’s circumstance is fleeting—puberty, pregnancy, abortion. Her life feels like a series of involuntary events and Fu partly achieves this effect through the quick pace of the poem. The young woman exists simply as an organism programmed to reproduce, and despite her deep aversion, she succumbs to her “humid, fertile darkness:/the black soil of equatorial Amazon.” (33). In “Lifecycle of the Mole Woman”, Fu uses the same terrene language. A mole woman marries a mole prince amongst “towers” of “inflamed earth”, “the black forest of a black forest cake” (16). At the wedding, the mole prince “tenderly gouges out” the mole woman’s eyes (16).

Fu is also interested in what the use of language says about our existence. While examining a restaurant menu in “Chicken the Size of Beach Balls”, the speaker describes English as having “serifs and curlicues/more complex than the Mayan’s” (36). The speaker then asks the reader to imagine “classrooms of tomorrow” when children will be asked to study a culture that:

honoured their gods of plenty by describing ingredients
in lush language, recounting which chickens ran free, which ones ate
flax, which ones lived and died in the dark. (36)

In what feels like a found poem by eavesdropping, “Four Teenage Girls at a Vietnamese Restaurant” chronicles the seemingly futile conversation of four teenage girls:

Yet, by examining How Festive the Ambulance as a whole, the conversation (and by extension, the existence) of these young girls is on par with every other character in the book. Whether you’re an escapist unicorn, assaulted mole woman, or Lululemon consumer, life is equally unyielding and absurd.

How Festive the Ambulance is a sombre, engrossing read. The book contains a wild mix of dread and humour, and I was often left unsure what to feel. Fu is unreserved in her approach, yet her bluntness holds a level of complexity and metaphor that makes each reread of a poem very rewarding.

Bio: Spenser Smith is a writer and photographer studying at Vancouver Island University. His work has appeared in The Maynard, (parenthetical), The Quilliad, text, and elsewhere. He has been the recipient of the Barry Broadfoot Award in Journalism/Creative Non-Fiction and the Pat Bevan Scholarship in Poetry. His poem, “We Met on 5th”, recently won first place in the Blodwyn Memorial Prize.