Dr. Edith Vane and the Hares of Crawley Hall by Suzette Mayr

Dr. Edith Vane and the Hares of Crawley Hall by Suzette Mayr 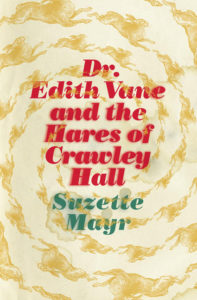 Suzette Mayr is an accomplished poet and novelist, based in Calgary. Her most recent novel, Monoceros, was nominated for a Giller Prize and won both the W. O. Mitchell Book Prize and the ReLit Award for Best Novel. Dr. Edith Vane and the Hares of Crawley Hall is her fifth novel.

The story begins with an overwhelmed Edith Vane, professor at the fictional University of Inivea. After decades of study, her first book is about to be published, her dissertation on “African-Canadian pioneer housewife memoirist Beulah Crump-Withers.” Everything is looking up for Edith; her hard work is finally coming to fruition. Except she can’t relax.

When Edith’s washing machine breaks just before the start of another stressful academic year, she doesn’t know how to handle it. Edith wonders how other people have time to deal with such mundane problems. She is of course looking at the world through the lens of an academic buried in the stress of the publish-or-perish lifestyle. Edith is so absorbed by her career that this everyday problem seems too abstract and superfluous, outside the realm of possibility as she already has an unreasonably long to-do list.

Edith goes to the store to buy a new machine, but instead finds herself justifying the purchase of a new wardrobe. The clothing is both a reward for her book being published and a psychological way of renewing herself for the new school year.

Edith’s struggle to meet the demands of her job is central to the novel. And the inciting incident of the broken washing machine propels Edith into a school year full of growing stress and fragility.

Yet despite the stress of Edith’s life, the book is written in tight, smart prose, which is often punctuated with humor, even when that humor is dark, ironic, or plainly depressing. For example, when Edith tries on the clothing at the mall, she describes her parents’ reactions to her clothing choices.

“She knows the patterns are wrong; her mother’s always reminding her she doesn’t have the body type for patterns. – Your boobs turn patterns into porridge, Edith Lynn, her mother reminds her. Frequently.

When she was a teenager and she’d show off her new clothes to her father, he would tsk and down another cognac. – I’m not sure why, he’d say, – you gravitate to clothes that make you look like…a dining room table.” – Page 11

As academia is the central setting and theme of the novel, the structure of the book is divided into the months of an academic semester, beginning with August and ending with December. This creates a welcome organization to the often disorganized events of Edith’s day-to-day life.

The book is written in present tense, capturing the immediacy of Edith’s every-growing to-do list that only seems to get more difficult to complete. Despite the immediacy of Edith’s present, Mayr weaves in many flashbacks to provide a background to the moment Edith now finds herself in, her academic past, including interactions with the Dean and her thesis advisor Lesley.

Lesley was a nightmare, and planted a destructive seed in Edith’s head, which grows into paranoia both about herself, and about Crawley Hall. Lesley went as far as to file complaints against the school as a hazardous working environment. Not only did she make problems for the school, but she also made Edith’s life a nightmare, and seemed to spark an anxiety in Edith that snowballs into her current state of stress over school and publishing to stay relevant and keep her job. This publish-or-perish mindset weighs heavily on Edith in the present, yet she still thinks about her advisor and longs for her in a way even though her therapist tells Edith to stay away from Lesley for her own good.

And the therapist is right. Lesley is just plain mean. For example, after forcing Edith to start her thesis over after several years of work, Lesley sabotages her defense with off-base questions about the relevance of her entire thesis.

“- I know this is an unfair question, Edith dear, she asked, – but does your dissertation topic even exist? I was in contact with the head archivist at the National Archives, and she told me that a letter uncovered just last month in the Canadian prairie section of the archives suggests that Beulah Crump-Withers was a pseudonym for an American, bootlegging, sleeping-car porter, a man, named Clarion Williams. This undermines the whole premise underlying your dissertation, doesn’t it?” – page 48

Lesley is so cruel that you can’t help but share Edith’s continual visceral anger and disappointment as her advisor continues to stoop to harsh, new lows.

To make matters worse, not only are the duties of academia overwhelming, but as the novel progresses, the school itself seems to come alive with malicious intent. There are rumors that Crawley Hall is cursed and causes all sorts of health problems.

Mysterious new passageways appear, doors suddenly become locked, and then of course there are the hares themselves. After Edith’s initial experience with the mystery of Crawley Hall, Mayr describes Edith’s perspective on the supernatural:

“She doesn’t like having to believe in the supernatural, especially so early in the school year, and so early in the morning. She is a scholar, an intellectual. There has been no peer-reviewed, conclusive article published about the existence of the supernatural, but she also understands that some things can be unknown, some explanations still percolating and awaiting discovery.” – page 24

Things only get weirder from there. Crawley Hall is infested with rabbits, maggots fall from the ceiling, and a sinkhole even opens up, threatening to swallow the building.

The events have the feel of magical realism, though it’s unclear if anything supernatural is actually going on, or if this is more of a psychological device. Could it be that Edith — thanks to Lesley’s insistence — channels her academic myopia into the world around her, perceiving her environment as toxic and unstable, when really her problems are with her past?

This is a strange, beautiful novel that invites the reader into the stressful mind of its protagonist and provides a fresh, creative perspective on the plight of the modern academic who is juggling classes, publishing credentials, and all the other twisted halls of university life.

Will holds an MFA from George Mason University where he was assistant fiction editor for Phoebe Journal of Literature and Art. His book reviews and short stories have appeared or are forthcoming in Parallel Prairies, Unburied Fables, Expanded Horizons, The Northern Virginia Review, Another Place: Brief Disruptions, Sassafras Literary Magazine, The Winnipeg Review, and As It Ought to Be.