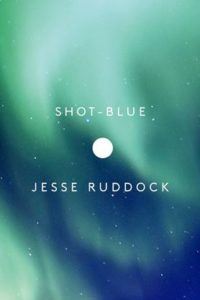 There is no doubt that Shot-blue is a promising debut novel. Published in February 2017 by Coach House Books, Jesse Ruddock’s literary work revolves around a tapestry of young people who struggle with isolation in the unforgiving Canadian North. The author quickly encapsulates our mind in an atmosphere of muted desperation, through her penetrating evocation of the environment and her simple and yet haunting writing style. From the very beginning, the landscape shapes the characters just as much as they in turn attempt to tame it into being their home. Alternately friend and foe, the brutal setting brings the young people together before imposing itself as the greatest antagonist to their longing for human connection.

This novel is reminiscent of Margaret Laurence’s celebrated Manawaka cycle. It appears that both Canadian novelists share the same themes of predilection: Like the author of The Diviners (among other titles), Mrs. Ruddock possesses the knack for depicting isolated locations in Canada and populating it with an ensemble of characters trying to overcome the limitations of their living context through a convoluted quest for love and belonging.

In Book One, arguably the most enthralling part of the novel, we get acquainted with the young Rachel and her 10-year-old son, Tristan, who might or might not be the fruit of his mother’s juvenile prostitution activities. The boy is said to be “the child of a child” (p. 66). The northern setting, with all its antagonistic forces, casts an almost otherworldly light on their everyday struggle for survival. While the mother worries that the boy’s development might be stunted by their unstable lifestyle, moving from place to place with barely anything to live on, the son “seemed to have a sense of purpose, standing at his mother’s side, protecting her, though he didn’t know how and maybe it was impossible.” (p. 46) This narrative foreshadowing becomes reality as events quickly unfold and Tristan is left to fend for himself after his mother’s disappearance. The surrounding adults intervene just enough to ensure he is given the means to survive. By an ironic twist of fate, the young boy is hired by Mr. Richter, who oversees the construction of the lodge on Treble Island, the very piece of land his mother considered rightfully theirs by some natural law. That is, until men armed with “papers” claimed it legally.

At that point of the novel, there is a growing expectation that an account of Tristan’s evolution from youth to adulthood (if he’s lucky enough to get there) will follow. But Book Two takes another unexpected turn expands the cast of characters. Among them, Tomasin, a 16 year-old girl, now takes precedence as the main protagonist. Her colourful and boisterous way of being somewhat overpowers Tristan’s taciturn persona and we are left to wonder why of all people she would set her views on Tristan and become so determined to get his attention. All the other young people working or vacationing on the island—Marie, Stella, Emiel, among others—also feel the need to counter its alienating influence by yielding to attractions and forming unrequited attachments. The intricacies of their motivations and their actions ultimately elude the most analytical of readers, just as they seem to elude those involved. The breaking point reached, they are forced to face the consequences of their own reckless ways of dealing with unhappiness and loneliness.

Through Mrs. Ruddocks’ skilful characterization, idiosyncratic personalities of these remote territories are transmuted into universal, almost mythical figures of lost and neglected youth. The novelist aptly avoids falling into the trap of caricaturing the intense and sometimes dramatic patterns of thinking of teenagers and young adults. And while it can feel at times that not much happens externally, especially in the middle part of the novel, the masterful use of inner conflict and existential incommunicability between beings sustains our interest until the end.

One can only wish that the plot had focused more strictly around Tristan and Tomasin’s viewpoints, who appear as the real stakeholders of this story and the most interestingly contrasting characters. In my opinion, trying to encompass every secondary character’s experience only dilutes the power of the main storyline. In consequence, the otherwise compelling ending runs the risk of producing a deflated effect on the reader who might have gotten lost in all those criss-crossing plot lines and shifts in sympathies.

All things considered, this novel defies genre classification. With its great emphasis on interior characterization, Shot-blue is primarily a psychological novel, but multiple elements from classic coming-of-age stories such as Great Expectations and Jane Eyre can also be detected without any great exertion of the mind. It is also very much a social problem novel, portraying the harsh realities of growing up in those isolated parts of Canada through their effects on the characters’ lives: poverty, prostitution, teenage pregnancy, child labor, to name only a few. In some ways, it could almost be read as a modern cautionary tale of sort, especially when one considers the very similar, almost circular, fates reserved to Rachel and Tomasin. In consequence, the reader’s expectations as to how the story should unfold are, for better or worse, constantly challenged and in need of revision.

Karine Legault-Leblond’s whole life revolves around books: emerging Quebecer writer and French Lit student (University of Ottawa), she works full-time in a library. In 2015, she won a literary prize for one of her short stories, which was published in a collection. She keeps on writing, reading and learning about the craft.