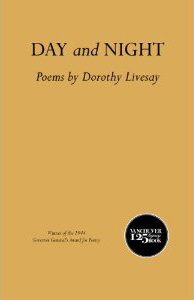 Day and Night was awarded the Governor General’s Award for Poetry in 1944 and established Dorothy Livesay as a writer. More than 60 years have passed since then and I wondered why the publishing company made the decision to print an anniversary edition. Upon reading the poems however, I realized that Livesay’s poetry is still relevant, particularly in light of present-day political unrest and economic uncertainty. Her poems concern themselves with the human penchant always to want more and the consequences of that greed, with wars and the unpredictability of weather.

In her poem “Outrider,” which reads like a story and presents clear, strong images, the poet writes of a man who returns to the family farm during the Great Depression. He finds the land barren and only his memory of it lives on, serving as the scout, the outrider, who rides on ahead to let people know of a situation. He remembers how difficult it was to work “the earth / Grimly hanging on to her own” (20). And how when he left the farm, a grown man, to seek employment in a factory, he discovered

A thousand men go home
And I a thousandth part
Wedged in a work more sinister
Than hitching horse and cart. (23)

He comes to know the bleakness of that world and of the farm, how unyielding it can be:

There is no milk nor honey flowing there.
Others allay the thirst with their own blood
Cool with their sweat, and fertilize despair. (28)

Any goodness, any resolution, Livesay writes, is in man himself, in his ability to breathe life into his future:

In the poem “Day and Night,” Livesay speaks of men working in a factory dehumanized by the long hours in toil and sweat with little pay, fighting with machines to build more machines, fighting racism that destroys friendships:

. . . Until they said
That nigger is too smart the way he smiles
And sauces back the foreman; (33)

and learns the only way to combat the injustices is to protest, to strike.

“Seven Poems” speaks of the senselessness of war and its devastation on those who come in contact with it: “thoughts are drowned / The river’s chant is lost, in splintering gunshot sound:” (13) Livesay goes on to say:

We hold a leaf upon the eyes
And its green ribs press down like veins
Into the nerve and sinew of ourselves. (18)

But those who have fallen cannot see such beauty for they are “asleep on the long limb of time.” (18)

These poems leave the reader feeling disenchanted with society but Livesay does not stop at the portrayal of inequality and hard times. She calls attention to the resilience of humankind, the need to go on, for the spirit to live no matter what the circumstances. Livesay’s poetry has endured because the poet understood that humankind exists because of the celebration of life and the way to celebrate is to remember the struggle for betterment, to honour memory, to applaud integrity. p