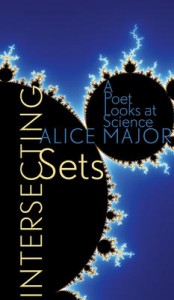 A scientist, I am not. The closest thing to a science course I’ve taken in a long time was a requirement-filler at SFU, a delightful 3-credit offering that came to me during an equally delightful summer session. The course, which shifted my thinking – as all great courses should – was Physics for Arts Students.

A great professor has much to do with a course being quite so remarkable, and Tony Arrott was exactly that: an engaging and entertaining teacher who was able to present complex ideas clearly. Another reason the course was so memorable was the content imparted – just enough of a grasp of the principles of physics to grant me a lifelong admiration of its elegance. Admittedly, I’d still have a hard time explaining much of the business of physics to anyone else, but the course was downright exciting, certainly more than the standard Physics for Science Students would have been, at least for me.

I suspect that the poet Alice Major would likely have passed either course – the one designed for those of us with right-brain propensities, or the one for those who knew the purpose of all those function buttons on the calculators. Just as Professor Arrott did with that long-ago undergrad course, with Intersecting Sets, Major takes me into a similar realm, the galaxies of wonder.

Her approach is scientific and orderly, leading readers step-by-step through the basics of poetry – figurative language, sound, rhythm – as she leads us through the basics of science. Whether she’s distinguishing between the ways that plants and animals grow, or considering the paradoxical characteristics of holograms, she finds ways to integrate poetry into the discussion. She dissects the principles of science, spreading them on the page alongside elements of poetry. She effectively uses literature as a language for making scientific ideas clearer. And the skill with which she integrates the two points of view demonstrates such careful precision it’s hard not to think of her as the smart girl you’d have wanted for your lab partner.

Inversely, she also uses the language of science to define poetic concepts. Her discussion of metaphor relies on the language of science’s sister subject, mathematics. She refers to “three main equations [italics are mine] that underlie most of” them (32). She goes on to cite these equations defining metaphor as being “the direct comparison of one sensory field to another” or of “a sensory field to some abstract concept” (32). I’m not accustomed to considering poetic elements with such scientific-sounding terminology as ‘sensory fields,’ but I must admit, I like the tidy unfussiness.

Major justifies her approach with the explanation that “metaphors are less like riddles than equations – a metaphor is the equal sign between two apparently different things. It’s a symbol that says ‘these are the same’ and also the sign of an action, of a potential. E = mc2 doesn’t mean simply that energy is the same as mass multiplied by the speed of light squared. It means that energy and mass can be transformed into each other, that one mode of being can become another” (35). And if the ability to become something more than a gathering of words on a page doesn’t serve as a definition not only of metaphor, but of poetry itself, I don’t know what does.

She goes on to cite biological evidence that “An apt new metaphor can literally reconfigure the brain” (44). This offers me a shred of hope that perhaps the right poem will indeed change the world.

She considers the idea of lines – poetic lines, power lines, straight or converging ones – and ties the notions together as neatly as if they were strings of embroidery floss worked into a design.

But the overall unifying trope of the book is the all-too-human case of her father’s losing battle with Alzheimer’s. She cites Rhona McAdam’s poem “Memory” as a springboard to the way his “stories slipped backward in time, swung there for a time, then ceased” (24). She recalls the breadth of his imagination, the poems he wrote and memorized, the gradual losses he experienced – of language and memory and recognition of the world around him. By including these personal recollections, she ensures that her book fulfills the promise invoked in the phrase that serves as the title of her closing chapter: “A Poem is How We Felt When . . .” (235) and inspires us to think and re-think the many delicious ideas she’s offered.

Anyone who enjoys juxtaposing ideas, or who thinks it might be possible to toss thoughts back and forth from one hemisphere of the brain to the other, probably needs this book. It could well lead to a change in the way you see the world. p

Heidi Greco is a firm believer in the scientific principle of entropy. As evidence of its power, she cites the clutter of her office where the forces of entropy often appear to be winning.

This entry was posted in Book Reviews, Non-Fiction. Bookmark the permalink. Both comments and trackbacks are currently closed.