calling down the sky

calling down the sky 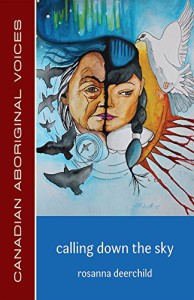 Rosanna Deerchild’s second book of poetry, calling down the sky, is a poetically and narratively powerful collection in which Deerchild bears witness to her mother’s experience in residential school, the long-term impacts of that trauma, and both women’s resiliency. From the opening pages of the collection, she encounters the difficulties of telling a story long kept silent, of witnessing the story as it is told, and of living the consequences of that story. In addition to telling the residential school story, the work of the collection strengthens the connection between mother and daughter.

The first poem, “mama’s testimony: truth and reconciliation,” opens with the following lines: “people ask me all the time/ about residential schools/ as if it’s their business or something” (5). Deerchild makes an important political and cultural statement by highlighting the implicit violence we do in insisting that Indigenous people put their pain on display for the sake of white settler education. In calling down the sky, she encounters the trauma, and she simultaneously resists voyeurism, in part by drawing attention to the difficulty of speaking and of hearing.

In that first poem, Deerchild’s mother goes on to say why this request that she speak now, after so many years, is so presumptuous and so intrusive. From the speaker’s childhood, community denial has accumulated on official denial:

there is no word for what they did
in our language

to speak it is to become torn
from the choking (9)

Images of breaking, cutting, choking – these characterize not only the experience but the memory and the telling thereof.

In part, the collection works to dramatize the reconnection between mother and daughter, and the acts of telling the story of survival and of listening to that story serve as catalysts toward that end. In “the first time,” Deerchild writes of her disconnection. She cannot “take this story from her” because,

our stories together
too thin threads

break between us
mama does not speak

Only when Deerchild asks about “her diabetes/ her hip achy back// her sore knees” (24), which are, as it turns out, the residential story manifest in the present, does her mother begin to speak again: “i listen to her talk/ back words slow” (25). Her mother’s unfolding story brings about a renewed tenderness between the two. While at the start of the collection, “mama calls me babe and my girl/ but cannot say i love you” (16), while she “kept herself/ a secret” (14), while her love is punctuated by “her anger [. . .] thrown quick/ jagged pieces of glass” (16), their connection becomes intimate, gentle:

her thin strands
through my fingers
fragile threads
that connect us

i stay close watch
until her eyes close

i stay until her breath softens
rises
into dreams (75)

Deerchild’s story and her mother’s are held together throughout the collection with images of weaving, of thread and of hair. On her first day of school, Deerchild’s mother “weaves/ two braids” that remind her “who i am/ always pointing me// back home” (10-11). Her mother does this in defiance of her memory of having her hair cut on her own first day of school:

The braids, for both daughter and mother, serve as orientation, toward home and toward wholeness. Indeed, in a dream, the speaker’s mother is told to

it’s the only way
to get rid of that nun

to finally escape this place
to find the exit

The title poem, “calling down the sky,” invokes an image of protection for the Indigenous children against the violence inflicted by the priests and the nuns. In that poem, the Northern lights, a “shimmering shawl fringe/ against black” (48), descend amidst “shrill trills/goose ducks loons/ even moose calls” that terrify the priests and nuns (49) – a goddess strong enough to combat the Catholic God, even for just one night. It’s not only an image of supernatural power, though, because the children have themselves “conspire[d] in Cree/ pass[ed] notes” to engineer part of the display (48):

sound snags shawl
we sing her to earth

This image of the Northern lights as a protective force does not merely speak to a past mysticism; Deerchild uses it to reach into the future. At the end of the collection, she repeats the image, again as protection against colonial violence. In “when i think of mama in residential school,” she writes:

if the indian agent came
commanded give me your children

if the mounties came
demanded stand aside

if the government came
declared it is the law

if they came for them
what would i do

what solace would i find
there in the silence (76)

The silence, here in contrast to the noisy display engineered by the children, speaks in part to the ongoing violence to which Indigenous people are subjected – from the thousands of missing and murdered Indigenous women to the suicide crises on the Northern reserves to the overrepresentation of Indigenous children in foster care – toward which settler culture is largely silent. “what solace would i find/ there in the silence” also works as a call to action: The children at Guy Hill Residential School who call down the sky for a night’s protection can only do so collectively. So too, to protect her own children, if she were alone, the speaker could expect to hear only silence, the same silence of community denial her mother invokes in “mama’s testimony.” However, as part of a collective, the fury and protection are potent. ♦

melanie brannagan frederiksen is a white Canadian settler who lives on Treaty One territory. She is a writer and a copy editor whose writing has appeared in Prairie Fire, The Waggle, the Winnipeg Free Press and The Winnipeg Review.

Buy calling down the sky at McNally Robinson Booksellers.