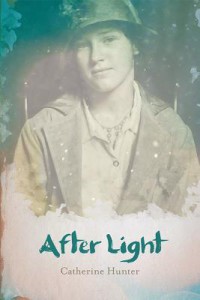 Catherine Hunter’s fourth novel, After Light, is an intricate family chronicle, a story of stubbornness and self-preservation, hardship and survival. The narrative moves from Ireland to New York to Canada, following the lives of Deirdre Quinn, her son Frank Garrison, and her granddaughters Von and Rosheen. Their histories show how the wounds suffered by one generation are mirrored in those who come after, and what it takes to move beyond past hurts toward wholeness.

The novel opens with Von receiving news of her sister’s death in New York. Von goes to Ireland, fulfilling her promise to help Rosheen research their family’s story for a multi-media art project she’d planned. Von made the promise reluctantly; she’d rather just run her greenhouse business and leave the past alone. But when she encounters Rosheen’s grown son, Kyle, who’s determined to learn more about his mother, Von is forced to revisit stories that she would rather not remember, let alone tell. Through this often unsettling process she learns that her family’s history is richer and more complex than she’d imagined, and finally begins to recognize her sister for the artist she was.

Von’s piecing together of her family’s story in the novel’s present time, 1999, alternates with longer sections set in the past, focusing first on Deirdre, then on Frank, then on the younger Von and Rosheen. Each of these narrative threads is full of incident, yet Hunter maintains a close focus on the characters and their relationships. The sections set in the present are narrated through Von’s perspective, while the past-tense sections give us much information that Von doesn’t know. Hunter illuminates the social climate of Ireland in the 1910s and New York in the ’20s and ’30s with well-chosen incidents. The indignities of poverty, and the “do as you’re told” parenting of that era, stand out in living colour.

Deirdre’s early life in Ireland is one of desperate poverty – and after she’s married off at sixteen, simply desperation. She escapes to New York, where she gains a new husband and a home, but life is no less difficult. As a means of survival, she maintains an attitude of hard practicality: finding ways to get by, encouraging her son to learn a trade, discouraging his artistic tendencies.

Frank has all his mother’s determination and skill at making his way in the world, but there’s little sympathy evident between them. He feels her hardness toward him as anger, even hatred; his eagerness to escape her is one reason for his abrupt decision to join the Canadian army. The intellectual world of the educated young men he meets in the army contrasts jarringly with the horrors of combat.

Much later, a friend of Rosheen’s sees pre- and post-war photos of Frank side by side. The difference is striking:

The difference isn’t just the disfigurement of his injuries. He’s prone to disorienting nightmares and outbursts of anger that leave his wife and children frightened and edgy. His trauma affects his family in a catastrophic way when, in the throes of a nightmare, he causes an accident that permanently disfigures Rosheen.

Hunter handles the revealing of her characters’ histories very skilfully. We know from the first time she mentions Bobby that he was important in Von’s life, and that her history with him is somehow tragic, but it’s only in the final section that the whole story comes out. Rosheen’s accident is revealed in a similar way, hinted at with a judicious level of suspense that’s never overplayed. We know, too, that Frank’s’ dream of studying art is not going to come true. The reader who’s paying attention will know the reason – the hints are unobtrusive yet clear – but all the same, when the full story is told it knocks the wind out of you. (It still had that effect on me the second time, when I knew what was coming.)

Parallels between Von and her grandmother emerge as the novel progresses. Von shares Deirdre’s fierce survival instinct, and her tendency to believe she knows what’s best for those close to her. Out of these impulses each of them tells a lie that has lasting effects. When Deirdre’s first husband dies, she abandons his children on the doorstep of a convent, leading them to believe she’ll return. She lies again in order to put the past behind her and marry Tomas Garrison in New York. Von’s lie involves interfering with Rosheen’s love life, out of a desire to avoid risk and prevent hurt.

The tragedy and irony of these two women’s lives is that they end up hurting others and themselves while doing what they feel is necessary. Deirdre’s abandonment of her stepchildren has terrible consequences for them, while Von, in her reasonable desire to keep the family business afloat and a roof over her father’s head, feels she must cut ties with Bobby, whom she loves. Both women suppress their feelings to keep from facing the enormity of what’s happened to them and what they’ve done.

Trauma echoes through succeeding generations in this family, from Deirdre down to her grandchildren. But there’s another kind of echo through the generations. Rosheen, who’s physically and emotionally damaged like her father, is also an artist like him. She gives new life to Frank’s work by incorporating it into her own; out of pieced-together fragments of her family’s story, she makes a work of art. ♦

Joanne Epp is a Winnipeg poet whose first collection, Eigenheim, was published by Turnstone Press in 2015.