The Burgess Shale: The Canadian Writing Landscape of the 1960s by Margaret Atwood

The Burgess Shale: The Canadian Writing Landscape of the 1960s by Margaret Atwood 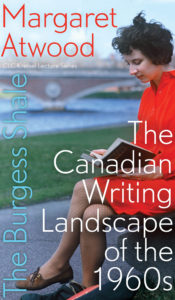 The Burgess Shale is not a typical scholarly work, but instead a transcription of Margaret Atwood’s lecture to the University of Alberta as part of the CLC Kreisel Lecture Series in 2016. In her lecture, Atwood provided insight into the influences and impacts of the ‘60s on Canada’s writing community. “That decade in which the current writing landscape of Canada and the various infrastructures we now take for granted was formed.”

Through this lecture, Atwood provides an account of the past that is shaped by her signature wit, humour, and insight that readers have to come love and to equate with Canadian Literature. As a Canadian icon herself, Atwood provides a window into her own early writing days which will draw a lot of readers to this work.

She recounts her days as an emerging writer: “Some of us had prose ambitions, but none thought they could make a living on their writing alone…We didn’t think about writing as a career, but as a vocation—a calling.”

She describes being taught English Literature in school and only haphazardly discovering a handful of Canadian writers along the way. Through these glimpses into Canadian Literature, Atwood developed a hunger for Canadian literary identity which fueled her and her peers to create a uniquely Canadian culture of literary arts supported by grants, programs, and the overall mindset that Canadians have their own unique stories to tell.

Reflecting on time throughout the lecture, Atwood uses the metaphor of the title, the Burgess Shale, to capture the concept of a decade preserved in time. She compares the ‘60s to the Burgess Shale, a geological, physical piece of Canada that preserves fossils. In this extended metaphor, the fossil of the ‘60s is shaped by the foundation of the bedrock around it, as well as the clues that decade can offer to provide context for those early days and what we now know as modern day Canadian Literature.

On the topic of geology, Atwood remarks, “Today’s poets flower on a subsoil of their dead predecessors.” So what is that bedrock that the ‘60s grew out of?

She provides a foundation for the reader to understand what came before the ‘60s, listing a number of things that seem downright primitive from a modern perspective, but were facts of life at the start of the ‘60s—the civil rights movement hadn’t happened yet, segregation was still prevalent, women couldn’t receive birth control unless they were married, and feminism as a whole hadn’t been taken seriously yet, to name a few. The ‘60s began in a world that had several hardships in its recent memory, including two world wars, and the depression. Atwood notes that creative energy and money had to go to war in those times. But by the time the ‘60s came about, she and her peers could afford the luxury of worrying not about getting a job, but which job.

Atwood then goes on to provide a snapshot of the state of the literary landscape at the start of the ‘60s. In 1960, Canadian publishers printed exactly five novels in English that were written by Canadian writers. And because there were so few books being published, there were no grants or creative writing programs as we know them today.

Atwood remarks that when she was growing up, young writers didn’t have access to Canadian writing because it just wasn’t being published. This meant they had no frame of reference for what a Canadian writer was or did. They had no examples or role models in those early days.

The major change that came about in the ‘60s to upend this was the cultural shift in perception of the arts. There was a demand for Canadian books, so more Canadian books were published in this decade. An increase in writers meant there was a community, and the community rose to support itself through organizations, grants, prizes, tours, etc.

So what became of this fossil? What do we make of it today? This is what Atwood is really getting at. How did this moment in time shape the present and everything that has led us here? She explains that the momentum that began in the ‘60s has pushed us here.

“The generation of the 19’60s was instrumental in creating the writer-related institutions and infrastructures we see around us today, from unions and private grant programs and prizes to book tours and book festivals; they did it then, not for fun, but out of perceived need. They were creating spaces for their own writing and that of their peers.” (11)

By the ‘70s, the Canada Council for the Arts was awarding grants, literary festivals took shape, creative writing programs appeared, more writing prizes were offered, and fundraising campaigns took off as artists maintained that what they did was work and should be supported.

Atwood recounts some charming tales of these fundraising campaigns, namely “The All-Star Eclectic Typewriter Revue” fundraising evening in the mid-‘70s, in aid of the Writer’s Union which was formed in 1973. She offers funny anecdotes about early publishers and pokes fun at critics, and even discusses her foray into the risqué, which she provides an excerpt of here, “Regional Romances; or, Across Canada by Pornograph,” which failed to be pornographic and ended up as a satire.

The ‘60s were not so much a time of revolution and change as they were a time of transition, shifting priorities and perspectives.

This is a book about time and perspective. What place does this lecture transcribed in book form have in history? Like a fossil, it too preserves a period in time. It is a treasure for readers interested in Canadian Literature because this is where it all began. Any Atwood fan will be charmed by the prospect of getting a glimpse into the life of a writer who has become inseparable from the Canadian Literary world.

Will holds an MFA from George Mason University where he was assistant fiction editor for Phoebe Journal of Literature and Art. His book reviews and short stories have appeared or are forthcoming in Parallel Prairies, Unburied Fables, Expanded Horizons, The Northern Virginia Review, Another Place: Brief Disruptions, Sassafras Literary Magazine, The Winnipeg Review, and As It Ought to Be.