Cardinal in the Eastern White Cedar by Roo Borson

Cardinal in the Eastern White Cedar by Roo Borson 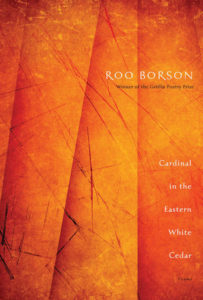 Ever since I read her poem, “Rubber Boots” (1989), which I found in an anthology that would let me teach classic Canadian poetry to first-year university students, I have been enchanted with Roo Borson’s work. The chance to review her latest collection, in which cardinals (both fowl and clergy) figure prominently, was one I had to take, at long last.

In a first read-through, the pieces seem to constitute a lyric trip report, one that points up the beauties of Rome as if stitched onto a fine word-quilt. Soon, though, other phases of journeying, from backyard forays to a lingering stop before a fjord, take over from the Roman excursion. Wide-ranging sensibilities join travels far afield: Eastern philosophy meets Stoicism, and shares the collection with Secular Humanism. However, the final section, “Cedarvale Diary,” caps the volume with dated entries spanning over a year that give readers the thrill of extraordinary events coupled by the satisfactions of the quotidian. These collected poems and journal entries must tickle and tantalize anyone intrigued by Borson’s often-playful material, delivered in her mature voice.

The sense of poet-as-observer dominates the Roman-antiquity section, “Painted Garden,” with the theme of locating the legacy of the last great emperor, Marcus Aurelius, giving gravitas to the pursuits of the 21st century searchers: Borson’s is a supporting role in this exploration, but her eye for detail makes her a faithful reporter of the findings: “a lost city of arches, geometric pools, / the odd architrave of reddish travertine” (11). When the quest reaches its glorious goal, the celebrants have Borson to mark the chief searcher’s find: “Janice, face raised, silent, and before her, / seated on horseback, arm likewise raised, Marcus Aurelius, that / line between the living and the dead—and I begin to understand then…” (9). Those who passed long ago still speak to the living, as long as receptive senses are open to their messages.

Other travels follow in the second section of the book, which bears the contradictory title, “Putting a Seal on Speech and an End to Wandering”: of the elusive title creatures in “The Horses of Adelaide,” the poet remarks, “tucked into a corner of the field, / glimpsed now and then in the distance, between the gum trunks” (28). The long-contemplated fjord in the poem, “In Fjord Country,” stirs the response, “There are places on earth the soul must appear, / and others it shies away from”—though it turns out that in its dim winter presence, the fjord itself is neither (55).  Roo Borson characterizes herself in the opening poem of this section, “A Sideways Spring,” in this manner: “Having to state my occupation / for the official issuing visas / just another tousle-haired old poet.” She obviously bemuses visa-granting personnel with this assertion, but such a glimpse into her self-identifying feels like a wink at the reader, as if to say that the poet as world traveler will always be an oddity. (This strikes me as strangely familiar, and will probably have the same effect on most of the collection’s readership.) Elegies such as “One” (22) appear here and there within the middle of the book, to say that those who can no longer travel with physical bodies may be carried in the hearts and writings of the living. The secular humanist in Borson observes the loss of her missing companion in a quirkily irreligious fashion: on the same day, at the same time, and in the same place in Montreal where perhaps the two last connected meaningfully, she and “that one among the company of the dead” (23).

I have said that “Cedarvale Diary” speaks loudest to me; as a journal keeper for more decades than I care to count, I respond avidly to the diarist’s imperative when it finds poetic outlet under the pen of another writer. Though occasionally prosaic, as on January 5th—“She said every year has the likelihood of being good when it first arrives” (60)—most entries count as prose poems, with actual poems in the form of haikus or short snippets of verse appearing irregularly. Like the stoic attitude of long-dead Romans whose remnants were sought after in the first section, a Japanese mother and daughter seem to channel an ancient philosophy, as the diary entry that profiles them conveys. Gathering “dark jade cress” one day, and possibly lily bulbs another, Borson remarks, “They would make a graceful subject for a nineteenth-century Japanese woodblock print” (81)—putting her reader in mind of a Zen aesthetic.

In search of the book’s title bird, I briefly pictured a red-robed Catholic priest occupying a cedar tree—then laughed when I learned that my sheepish pun had been brilliantly caught in the naming of the fowl, done by Roo Borson’s partner Kim. In the entry of February 14th, the poet notes Kim’s “distinction between males and females, referring to them as either Richelieus or Claudias” (66), and so encompasses both the clerics and the actress Claudia Cardinal(e). This amusing gender identification introduces the cardinals, but not in the Eastern white cedar of the title; that location for these colourful birds is noted in the entries of April 6, April 13 and April 21. The narrative of the cardinals’ confusion over the cedar’s closeness to the house, leading them to hurl themselves from the tree toward the nearest windows, has a tragicomic feel: “Again and again they return to the windows, as though to a problem that can be solved only by endless repetition” (69). In taking a tangent from the concept put forward by Einstein, that insanity is repeating the same action and expecting a different result, Borson shows the titular cardinals as having much in common with the humans observing them. It is a suitable metaphor to describe a reader’s approach to the poet’s own work—except that repeating the action of reading her work actually brings on the sought-after result, time after time: immense and lasting satisfaction.

Carolyn Creed received her PhD. in English Literature from University of Manitoba in 1998, after having taught post-secondary English full-time since 1980. Dr. Creed is Associate Professor of English at University College of the North. Her poetry has recently appeared in sub-Terrain, The Windsor Review, and the Global Poetry Anthology (Vehicule Press); both poetry and prose are featured in Poet to Poet (Guernica Editions), released in November, 2012. Her review of Rose’s poetry collection Marry and Burn appears in the Fall 2016 issue of The Goose (York U). The montrealpoetryprize.com website carries an MP3 of the author reading “Morel-Floored Forest”.