At the Gates of the Theme Park by Peter Norman

At the Gates of the Theme Park by Peter Norman 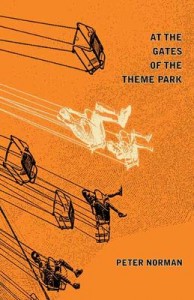 Peter Norman’s debut poetry collection covers a lot of ground without staking out any particular section as its very own. Norman rhymes a bit, messes with perspectives, fiddles with techniques, primps a tendency to lists and catalogues, and it all sounds refreshing and at ease. The writing is not laboured and only occasionally over-written.

Norman’s poetic trump card is to de-normalize the normal. In “Three-tone Electronic Fanfare,” a poem about the temptation of shopping, we are introduced early on to his cockeyed sightlines: “Admit the essence of your need. / It is to hold the not yet consumed” (9). Shopping is all about the caress of the tin can of beans, or the prod at the eggplant – fulfillment in the sensual pre-purchase touch. Listen to the language markers he drops in this poem: “slender hands, stroking, kissing parched shelves, bulbous with milk, yearning, fondle, fevered palm.” Ultimately we are satisfied in the touching rather than the possessing.

In “Unwelcome,” a poem on camping, or perhaps being lost, the overarching metaphor is really being out of one’s element, the inevitability of that in our lives, and what that does to a person: “I don’t remember where I was before this” (36), and its corollary from an earlier poem, “Reassurance”: “Think what you need to think / to feel safe” (19). Navigating modern waters requires long oars and jerrybuilt sails. In his handmade craft Norman heads courageously onward.

In an excellent poem of recollected childhood (“The Slough”), the sinister location for an innocent caught as a witness to a heinous event makes him feel like an accessory. At times Norman’s mockery of perspectives has the reader scratching his head, as in “Winter Morning,” when a woman falls down in the street and “A man holds out / his hand to her, / offering assistance / or asking for change” (32). I suppose asking for change might entail finding a different position for the woman lying in the street – like sitting, for example. If that’s stretching the point, I contend that Norman’s poems force us to stretch points and question what we take for granted, to expand our perspective and sense of our everyday habits.

The poem, in this aspect, becomes an un-telling. We never find out what fell out of the sweater the man put on, what ever happened to the woman who fell in the street, the man who stopped to offer assistance, or the woman with the dog let off its leash. This un-telling does not un-write the poem; it simply emphasizes aspects of the larger picture that are perfectly visible, except that now they are disproportionately so; the familiar turns strange, and the strange stranger. Sweet. ♦

Andrew Vaisius is a childcare worker living in Winkler, Manitoba.

Buy At the Gates of the Theme Park at McNally Robinson Booksellers.