The Other Side of Ourselves by Rob Taylor

The Other Side of Ourselves by Rob Taylor 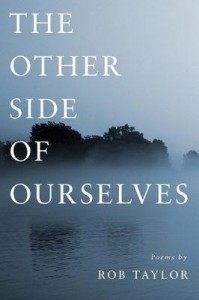 Rob Taylor’s debut collection, The Other Side of Ourselves – which in an earlier version won the Alfred G. Bailey Prize for an unpublished poetry manuscript – shows considerable talent and imagination. Here is a poet who likes to play with a variety of traditional verse forms as applied to free verse: ghazals, sonnets, haiku, and lyrical poetry. Taylor has a propensity for striking metaphors that he likes to extend and mix in pumped metaphysical guise, as in “The Wailing Machines” and “What the Minister Meant When He Said Love Is Like A Flower.” Also, he is adept at analogy and allegory, as in the playful “Happiness” and the nightmarish “The Night.”

In “You Can’t Lead a Horse,” Taylor plays with the old proverb: the horse can be led to “water” or the unfathomable but cannot be brought to drink it or necessarily to understand it. In a clipped series of ghazals, Taylor explores ways of looking at this problem of regarding the paradoxical nature of water’s life-giving but also drowning qualities. The poem is well modulated with a sense of play and humour, unafraid of the garbled slapstick implied in the lines, “The woman is drunk. / She asks the water for waiter (2).

What we speak is rocks.
What we cannot speak is water.

The sound of the boy’s death moved through town
like a ripple of water. (3)

Here is the beginning of a personal mythology, in which a system of images provides the subtext for interpreting the world’s underlying workings.

One of my favourite poems is the earlier mentioned “Happiness,” in which the elusive nature of happiness is given animate form as a cat that “you’ve forgotten out in the rain” then “suddenly remembered,” and that best appears when not sought out is uniquely captured in the following lines:

. . . Regardless,
your sin is forgivable as he is small
and stubborn and self-reliant –
you can’t lose your life sitting silently
with him curled up on your lap –
you would both quickly tire of that. (10)

The playful tone is reinforced by the rhyme of “lap” with “that.” As the speaker feels moved to walk across the room and “wait there for the longest time,” so allegorically the psychological duration between happy events is dramatized. A simpler and more clever poem I have not read in a long time.

Similarly, the nightmare poem “The Night” (which contains the tweaked titular line “the other side of ourselves”) extends the narrative in a pseudo-allegorical structure in which the speaker conceives of himself as simultaneously the victim of a crime and guilty of some deed for which he must wash his bloody hands in the lake.

The anguish and uncertainty and ultimate winning innocence of the speaker comes through as he tries to remember what crime he may be guilty of: “I was chilled, too adrenaline- / shot, too terrified to sleep. / And in this way I slept.” The poem conveys the deep-seated guilt that may be at the root of the archetypal concept of original sin.

In “Rejection Slip,” the poet artfully allows meditation to take him from the poem’s mundane starting point to a more penetrating psychological inquiry into his feelings. After his disappointment following the receipt of a rejection slip, the speaker finds himself momentarily alienated from his wife, who is singing in the shower. But then, in a turnabout of emotions, he finds his wife’s temporary removal a source of her attraction:

you were no woman I knew, or knew how to love,
and that awakening drew from me a tenderness
I can’t describe. (25)

The poet looks into himself and sees his contrary reaction to his wife as a lesson about his own difficult and conflicted nature. “Which explains the rejections, / I suppose: I can never say what I intend.” The poem closes on a lighter note, pointing out that this poem was intended as a “sonnet, for instance, and a lament,” though its effect turns comic and vaguely maudlin.

Father, somewhere down this stretch of doors
is Death. Not at the end, but near it. Love
is further in, I fear. And Fear, yes, even further.
But how to navigate this path? A leaping, I suppose,
a stumbling. My thin hand in hers. A lifetime spent
opening one door, finding another. Each room tidy
and warm, prepared for our coming.
In thanks, we cast these words ahead across
the distance. (58)

The final lines, “If they reach, and whom, we cannot choose / or measure or prove or disprove” are ultimately moving in their hidden faith and agnosticism. The best of Taylor’s poems are memorably fresh and startling in their simplicity and originality of perspective and approach. ♦

gillian harding-russell has published three poetry collections, most recently I forgot to tell you (Thistledown, 2007). The chapbooks Maya: Poems for the Summer Solstice (Leaf Press) and the Stories of Snow (Alfred Gustav) came out this year. Poems have recently been published in Windsor Review, The Antigonish Review, and Goose Publications (an online nature and environmental journal). Poems are forthcoming in the anthologies That Not Forgotten (Hidden Brook Press, 2012) and Poet to Poet (Guernica).

Buy The Other Side of Ourselves at McNally Robinson Booksellers.