The Rules of the Kingdom by Julie Paul

The Rules of the Kingdom by Julie Paul 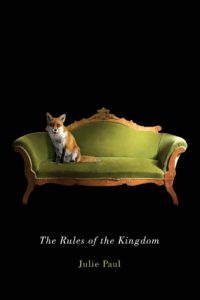 I first came to know Julie Paul as a storyteller. In The Jealousy Bone (Emdash Publishing, 2008) and The Pull of the Moon (Brindle & Glass, 2014), Paul drew readers into vividly wrought worlds populated by quirky yet utterly relatable characters who struggled to understand, and reconcile, their place in the world and in relationship to others.
Paul continues to explore the tension between place and identity in her debut poetry collection, The Rules of the Kingdom—a book with a strong narrative bent. Each of the 58 poems is like a pin stuck into a map; together, they record the journey that delivered Paul from her beginnings in Lanark Village, pop. 800, where “the hands of my brethren/still clap in the vestiary” (3) to the West Coast where “together we ride the road/that tempts the sea/to rise” (78).

But that is not the only journey Paul charts. In “Cleavage”, the third section of the book, she navigates the watery realm of motherhood: from the moment she first sees her daughter in “Gazing across Venous Lake” (55-56) to “Waterslide” (59), where—flooded with fear—she realizes that:
We live through our children
But we also die:

With every kick away from me
You
Alone

Paul’s poems expose the vulnerability and risk inherent to loving (and letting go of) the people and places that sustain us but they also celebrate our tenacity. In “Settlers’ Descendant Reclaims the Past” (3), she declares:
This is life
And this is life,
I claim it, finally—
In “The World’s Smallest Republic”, the fourth section of the book, Paul claims her life and marriage in all its mundane and messy glory: from the gift of flowers paid for out of the joint account to her full-throated cries in “Sunday Morning Praise” (83):
Oh, God, yes
Please take and sanctify
these gifts

How can I not
Give thanks
To the risen Lord?

Paul’s poems, like her prose, are clear; her voice, direct. She is a skilled and resourceful writer who conveys complex situations and ideas without extraneous abstractions. Yet, as we learn in “Discovery Coffee Shop”, she is prone to “become chaos/when chaos becomes the norm” (111). To find her centre, to bring her world into focus, she turns to writing: “the country of my salvation” (111).
Paul describes the patrons of Discovery coffee shop in detail: the “kids/in superhero pyjamas” and “the dozen cyclists [who]/all order their complicated drinks/for here” (111). In doing so, she moves from the specific to the universal, from a state of chaos to balance (112).
And the woman’s bleach-dried hair, backlit
By the rare December sun, turns to raffia,
Which gives me more hope than I’ve felt all season

Because, although it looks dead, pale,
Never once alive, I know that raffia
Comes from palm trees in Madagascar

Where nearly all of the wildlife –
Bamboo, lemur, fossa, seven types of baobab –
Does not exist anywhere else on this planet,

And the smallest known chameleon,
The Brookesia micra, can stand, calmly,
On the head of a wooden match.

Paul’s gift for storytelling is matched by her prowess as a poet. The Rules of the Kingdom is an outstanding achievement. Its poems straddle the divide between the personal and the universal, the known and the unknown, what is said and what—for better or worse—is left unsaid. It deserves all the accolades it has been given.”

Paul is no stranger to literary awards. She received the City of Victoria Butler Book Prize in 2015 for her second short-story collection, The Pull of the Moon (Brindle & Glass, 2014).

Shelley Marie Motz writes about culture, place and identity from the unceded traditional territory of the Songhees and Esquimalt First Nations. Her poems and essays have been published in print and online, most recently in Room Magazine, The Timberline Review, Plenitude Magazine and the Globe & Mail.