The Old Songs By Madeline Coopsammy

The Old Songs By Madeline Coopsammy 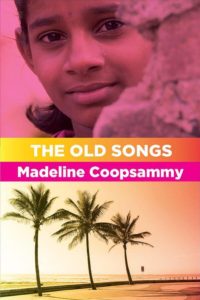 Coopsammy’s novel, set in Trinidad in the 1950’s, features Tessa Joseph who is eight years old when the story begins and nineteen when it ends with her leaving the island, having won a scholarship to attend university in Delhi. Tessa is an avid reader who dreams of becoming a writer “like Jo in Little Women” (p.91), but she gradually realizes that in Trinidad’s racist society she will never have a chance of success.

This novel has been tagged as young adult fiction, but it is more than a coming-of-age story. It is a detailed and rich portrait of life on the island in the era just before it gained independence in 1962. Along with Tessa and her family readers explore the neighborhoods of Trinidad’s capital, Port of Spain, attend the annual festivals there, and taste the unique food. We also and learn some colourful expressions that have evolved in this early multicultural society, such as “cockroach don’t belong in fowl party”(p. 129), meaning that if you mix with your betters you will be targeted. Then there is the frequently used term “steupsed,” meaning to suck air through your teeth in disapproval.

One of the strongest characters in the novel is Lucille Joseph, Tessa’s mother. Lucille is a Catholic of East Indian origin, and a woman determined to live her life as a Christian, westernized woman, even if, no matter what she does, she will be classified as low-class because in the eyes of most people she will always be a “coolie.” This a truth that Tessa gradually realizes through incidents of discrimination she experiences while attending a prestigious Catholic school. But she knows her mother will never make a fuss or question the authorities because staying in school is the only possible road to a better life.

Thus readers learn, through the life of Tessa and her family, that colonization is not just a matter of political control, it permeates everyday life from one generation to another. Even the Josephs have their own prejudices about less sophisticated East Indians who still work on farms. And they know virtually nothing about their family history except that their ancestors came from India as indentured labourers in early the nineteenth century, after slavery was abolished in the British empire.

There is no strong plot here. The story is told in a series of episodes beginning with the family’s move to a poorer neighborhood after the death of their father. Some of the dialogue between the young people in the family and their friends is clearly intended to provide information to readers, but the pronouncements of Tessa’s mother, Lucille, are always very real. And so is the mixture of emotions Tessa experiences on leaving her home at the age of nineteen. She knows she must leave, but already longs to come home again: “never to relax on the beaches … hear the roar of the Atlantic … drive through mountains where the pink and yellow poui trees were in bloom … feel the throb of the steel drums … was unthinkable.”

Madeline Coopsammy emigrated from Trinidad to Canada in 1968. Her poetry and short stories have been published in journals and anthologies in Canada and the United States. Her poetry collection Prairie Journey was published in 2004.

Faith Johnston is a Winnipeg author of one novel and two works of non-fiction.