The Midwife of Torment & Other Stories by Paulo da Costa

The Midwife of Torment & Other Stories by Paulo da Costa 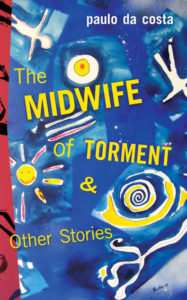 The author’s subtitle, “60 Sudden Fictions,” illuminates much of what a reader experiences in delving into Midwife of Torment: having entire life-narratives sprung fully grown upon the sensibilities, like Athena’s delivery from her father Zeus’s head to relieve a massive migraine. Spread out among six sections, da Costa’s fictions vary from mere flashes of life, mostly as tormented as the title suggests, to fleshed-out nightmare conflicts. These fictions never occupy more than three or four pages of the collection, yet some require days of mulling to decipher their word-codes. Luckily, the undertaking yields deep-seated surprises and sometimes sheer delights, and turns out well worth the occasional brain-cramp.

The title story, “Midwife of Torment,” involves a recurring character named Florindo Ramos, who falls through an outhouse hole and cannot cleanse himself to his own satisfaction. Called to perform an olfactory exorcism, the title character Felismina, “a woman accustomed to probing the depths of the psyche” (81), solves the problem by inducing the entire village to arrive at the village fountain during the full moon and coat itself in the unclean concoction of its own collective waste while bathing Florindo in it, so that finally everyone smells the same. The backward logic of the solution carries a bizarre message of community parity: we all share in a single member’s suffering, and must admit to our confraternity with him.

From the first tale’s second-story man, who performs the title break-in for the purpose of carrying out domestic chores such as laundry and dishes, to the last tale’s self-absorbed patriarch, Narciso Sisudo, who sees death around a certain corner and avoids it studiously, characters enact their destined tasks with an intensity that pulses through the collection. Some are named and some remain nameless, identified only in their earth-bound roles. Some, like Little Mary in “The Destiny of Little Mary”, have just arrived in the world, and others—the grandfather in “Closer,” who infects himself fatally by drawing his grandson close enough to pass on a virus—are on point of leaving it. Yet each central figure makes some point about our earthly existence, no matter how obscure. Animals like wolves serve as leading characters in a series of wonky origin tales, and even a fly can occupy centre stage, as in “Misunderstandings”: “The happy fly dives toward the man, grazes his head” (179)—and plays with the man as he tries fruitlessly to complete a crossword puzzle. In the oxymoronic phrase, “Expect the unexpected,” this collection will deliver magic-realist novelty as often as linear, here-and-now narrative.

A particularly lustrous section of da Costa’s anthology, “Aqua Libera,” provides the scene of fishy life from three different viewpoints, anthropomorphizing the finny swimmers such as Robala Silva (a rebel who refuses to attend to “school matters”), yet also giving the fisherman’s perspective on the act of casting a line—even a hook-less one, as in the case of the madman in “Eau Claire Fishing”. Multiple voices echo through the section, and no stable, solid viewpoint stays fixed for long. As in Escher’s “Three Worlds,” the leaf-skimmed top of the water, the fish below, and the shadows that trees cast are visible simultaneously. Do note the shadows, as these permeate the fictions, both literally and figuratively.

Readers long for a tale that speaks directly to them, even in a book that dances a pas de Basque around straightforward storytelling. Such a sympathetic tale seemed to appear for me in “The Reading,” about a poet nervously approaching the stage with all vulnerabilities exposed. However, the story takes a decidedly odd direction by its end, the uproarious applause refusing to match the poet’s lackluster stage-presence. So it comes up short in its bid to make me empathize with the pathetic figure’s weirdly celebrated self-exposure: “Slurred words could not negotiate the dark and congested path to the end of the room where whispers mushroomed” (72-73) catches a much more authentic response to this inadequate performer of his own works.

Instead, the story that speaks volumes to me, “Pickled Brain,” features a literary critic so harsh that the universe begins to exact a price for all the destruction he has wrought with his reviews. Repeatedly visited by an undertaker who intends to collect his dead body, the critic explains that he is not dead—and realizes that what is dead, each time, is the aspiration of an author whose work he has skewered. Before the tale’s fitting denouement, the critic has shot the undertaker, gone to prison, and taken his own life with a quill pen to the heart. And the apt end to all this retribution? The new young undertaker is a former writer, whose failure was precipitated by an unkind review from the man whose corpse lies before him. I laughed to the point of tears, but it could have been the other way around just as easily.

In a debate with a reader even more eclectic in her choices than I am, I defended my right to review a book for which the word “enjoyable” often proves elusive: “It’s as if I had been presented with a set of small puzzles, many of which require tooth-gritted concentration to allow solutions to arrive,” I told her, and received a verbal shrug for an answer. “Do it if you want to, then…” she conceded. What I can tell her now is that my rewards far outweighed my punishments in this endeavour. I defy any reader to prove that so rich a reading experience lacks a point, no matter how obscure some of da Costa’s sudden fictional messages may have been.

Carolyn Creed received her PhD. in English Literature from University of Manitoba in 1998, after having taught post-secondary English full-time since 1980. Dr. Creed is Associate Professor of English at University College of the North. Her poetry has recently appeared in sub-Terrain, The Windsor Review, and the Global Poetry Anthology (Vehicule Press); both poetry and prose are featured in Poet to Poet (Guernica Editions), released in November, 2012. Her review of Rose’s poetry collection Marry and Burn appears in the Fall 2016 issue of The Goose (York U). The montrealpoetryprize.com website carries an MP3 of the author reading “Morel-Floored Forest.”