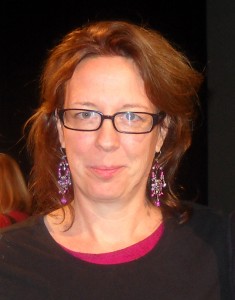 In this dress you will forget your inability to be fluid
and will walk into rooms as if you’ve been choreographed
to surprise us. It takes such courage to wear those foxes
on your feet and yet, if asked, we would all follow you
into the forest to clean the mess from our picnics. The look
is timeless. It elopes with light and borrows originality
from the great cloud of September 27 over Halifax
that momentarily convinced everyone in the city
to make their dreams more buoyant and less caffeinated.
You will have to stand alone wearing this dress
because we are all so new at being brave and are looking for
guidance which explains the wide sleeves and how often
you’ll feel the insistence of a bouquet to pull out
for our flailing spirits. Our spirits are sometimes
flailing but there is nothing mirage about this dress.
It reinvents the classic waterline and returns the crops
to our conversations which, once again, ripens our voices
to laughter.

fashion: a blend of shyness

Whoever wears this jacket is relieved of saying
anything. The collar is lined with the sound of pines
in late November swaying in wind that is seasonably
warmer than usual. Occasionally the whiff of a forest path
will assert itself in the middle of the panic
a social occasion will warrant and the belt
may be cinched then in a private resolve to take it.
In this way, the lining of the jacket is soft
with the velvet antlers of a new confidence. The outer
material is made from a revolution of projectors
and mirrors that camouflage the room onto its wearer,
effectively soothing them into the walls and paintings
they so often find themselves up against. The sleeves
are affectionate and the hem weighted with stones
specifically farmed for their ability to hold a person
in place without eliciting any fear of sinking.
The pockets are understanding and accessorized
with a folded note reminding the person that, later,
in the spring version, they can always choose
to flower.

My first choice was an aspen from the third week of August
so its leaves were both green for the love I had borne
with a compliment of the eventual yellow that is distinct and his.
We had burned leaves in our youth and, in the smoke,
decided to marry. Remember the moon, I’d ask but by then
we’d picked out ceilings to match the curtains and the sky
was something we heard when it occasionally drove by
an open window. There was, however, no time to find an aspen,
he had died that quickly, and in April, short of forsythia,
there is barely anything to suit the kind of winter wardrobe
an unexpected death requires. The simple choice would have been
something coniferous but it was more complicated than that.
I was his first wife and protocol leaned more towards cedar
than pine. His new bride could wear the mountain hemlock,
the noble fir of the first pew but I sat behind all of the years
without him and barely cast a shadow. I wore gloves
so when I touched his voice, I wouldn’t smudge his obituary.
I have kept very little and did not feel the need for purse
or clutch. I have laundered memories so often
they whisper and barely embroider: handkerchiefs
I now weep into for the younger version of myself,
who came to a forest whenever I saw him; and for our children.
Our children. They chose slender antennas and a translucence shock
to wear. When they entered the church they both quivered
the way siblings so often telegraph. The ocean was worn
pleated behind them for later when they both will feel drowned.