One Thing — Then Another by Claire Kelly 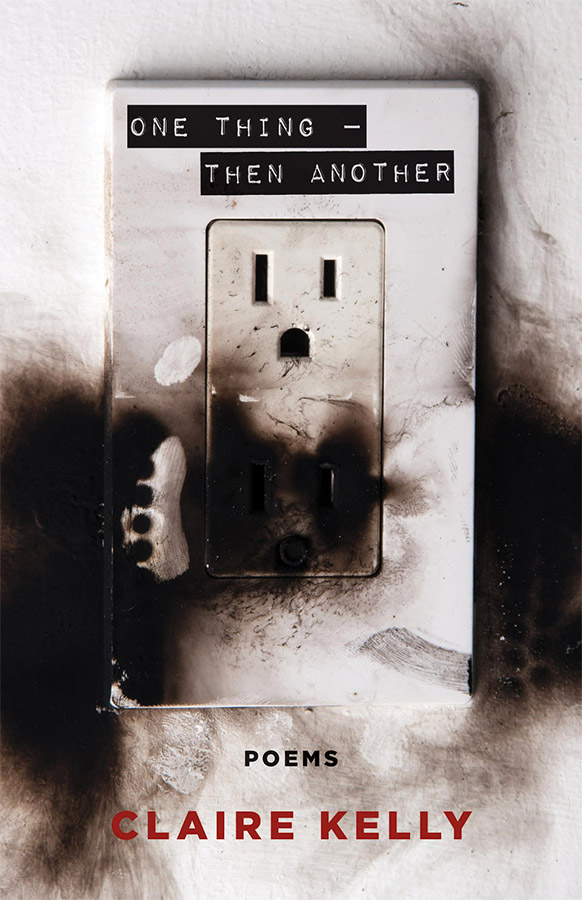 Canada is so vast that Europe could almost fit inside it. With vastness comes variance—from wet climates to dry climates, from “have-not” provinces to “have” provinces. In her second poetry collection, One Thing — Then Another, Claire Kelly explores this variance like a travel writer interested not in popular activities or landmarks but the locals and their lives. The speaker in these poems, however, is not a tourist but a resident of Fredericton who eventually moves westward to Edmonton.

“East,” the first section, focuses on Fredericton and New Brunswick as a whole. The imagery is a mix of nature and industry: snow, elm trees, sea water “soused with disease,” scrapmen, and jalopies (30). Some of the most interesting sketches are those of people. In “Neighbours Are Wormholes,” an old lady proclaims she is at war with squirrels. In “Renters in pyjamas,” a “foreman with a grey handlebar / moustache” holds a radio to his ear “like he’s / waiting for his jackpot number / to be called, for his life to finally / be different:

A cottage on Kennebecasis,
an all-the-trimmings Ford F-250
with fast-action heated-seats
and rear-view mirrors that defrost
without being scraped. He answers
with a voice that’s mostly rasp.
An asbestos-coated cough, structurally unsound,
like the ceiling finally collapsing. (36)

After the speaker moves from Fredericton to Edmonton in the single-poem second section, the third and final section is “West.” It opens with “In the Land of Cinematic Drought,” a five-part prose poem influenced by desert-based movies such as Lawrence of Arabia and Mad Max: Fury Road. With stark Western imagery and inventive myth making, the poem echoes Michael Ondaatje’s The Collected Works of Billy the Kid and is an example of Kelly’s impressive poetic range. Below is a paragraph that encapsulates the East/West, wet/dry contrast present throughout the book:

Know what a lighthouse is? Neither did I. But Grandpa said where the water—great sheets of it—is jeopardous, people built towers so their ships wouldn’t gouge underneath. Hired men to spit light out the way we do spines from poorly shucked Cholla buds. All year looking out at grey water, grey sky. Rain dropping like what I can’t imagine. Weeks of rain! he said. (46)

Also present throughout is humour, both realist and absurd, with a witty millennial lens. Edmonton is a city of “souped-up” trucks with “wide-stanced, / manspreading axles” where turkeys ride the bus and thank the bus driver even after learning no one else practises such etiquette (62, 55). In “Spring Solstice Blues,” eagles send “tenuous / text messages” to humans, “their talons / tapping buttons / like surly DMV workers / in a bad movie” (27). And in “A Millennial’s Poem,” the speaker remembers a time when “a good deed per week / was enough to keep the world / on its Easy-Bake™ axis” (37).

While One Thing — Then Another has clean, dividing sections of “East” and “West,” its subjects are often varied and pleasantly surprising. Read this book and travel to places familiar and strange.

Spenser Smith is a Regina-born poet who lives in Vancouver. He is an MFA student and teaching assistant in UBC’s creative writing program, and his poetry appears in The Malahat Review, Prairie Fire, Poetry is Dead, Contemporary Verse 2 and The Puritan.

Share Post
← This Has Nothing to Do With You by Lauren Carter Congratulations to Di Brandt & JL Lori! →