Naming the Shadows by Sharon Berg 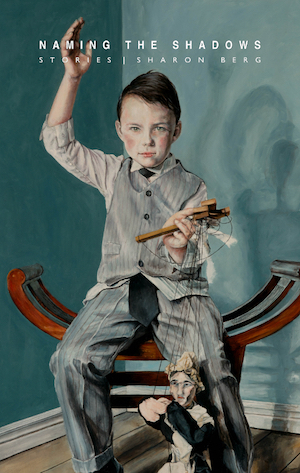 Naming the Shadows, Sharon Berg’s collection of stories, is a fascinating exploration of diverse subjects, from uncovering family secrets and probing social taboos, to examining career choices and overcoming personal trauma. The stories are character driven, and the theme that connects the ten stories and a novelette is the author’s tireless search for a woman’s place in today’s society and within the historical context.

The collection opens with the story, “A Violet Light,” which invites the reader to become a voyeur in the personal life of painter Édouard Manet and his wife Suzanne. Permitted into their bohemian social circle of artistic friends and acquaintances as well as into their bedroom, the reader becomes privy to the couple’s most intimate fears, desires, and deceits, cloaked in both partners’ necessity to conform to social norms. An interesting element in the story is the querying of Édouard’s infidelities—which some believe are hinted at in a number of his paintings. Truth in this case is as daring as fiction, and just as unpredictable. Berg dives into Édouard’s complex and conflicted alleged affair with Berthe Morisot whose portrait he painted, and who was to become his brother’s wife.

Suzanne made certain Berthe understood, in a shared code of glances, that she knew of the affair. Suzanne was just as certain that Édouard hid his liaisons not because he worried about her response, but rather because she had no part in them. In a man’s world, his dalliances were his domain alone, having nothing to do with his wife.” P. 14.

The author cleverly weaves the telling details of infidelity with convention, and the reader senses the author having fun with her rich material, confidently drawing on research of biographies and Manet’s paintings.

In “Trespass,” the author explores the persistent problem of bullying and aggression of misguided teenagers, and its inherent danger. But in this account, sibling devotion triumphs, and the eleven-year-old Behan manages to save his younger sister Elke from being sexually assaulted by a group of hostile older boys. The story ends with a heartwarming lesson Behan imparts to five-year-old Elke—to trust in her own strength and resolve.

Elke, the only time people can truly hurt you is when you let them. You have to keep telling yourself, ‘no one can hurt me.’ Then what they do will roll off you.” He touched my shoulder to emphasize his next point, “Like water off a duck’s back.” P. 37.

True to the title of the collection, “The Secret” explores the aftermath of child abuse and the shadows that stalk the victim. Trapped in the trauma of sexual abuse that took place when she was twelve years old, Lily, who interestingly becomes a doctor of psychiatry, obsessively collects curious mementos from her brief sexual escapades with numerous partners.

“She used men to overlay her nightmare with the details of other men. … They helped her to find distance from the memories of a twelve-year-old girl who did not know how to resist the attentions of a man.” P. 160.

The first impression leads one to believe that Lily’s fetish is her way of reaffirming her freedom. But at closer look, one soon realizes that Lily’s apparent freedom is in fact her entrapment. The woman is unable to form a lasting relationship. She is unable to trust. Unable to love. And remains shackled in her emotional abyss of fast and short-lived affairs. Curiously, Lily is depicted as a successful psychiatrist, and the reader witnesses the author’s clever subversion—an intriguing yet eerie message that Lily’s most important patient is the child within—her twelve-year old self.

Naming the Shadows, is a nuanced and vivid exploration of women’s lives and their age-old struggle to find their place in society. The stories are a must read for anyone who enjoys the challenge and the triumph of glimpsing the truth in family relations, be it the complexity of marriages, parenthood, careers, or sibling ventures, often deeply buried behind societal conventions.