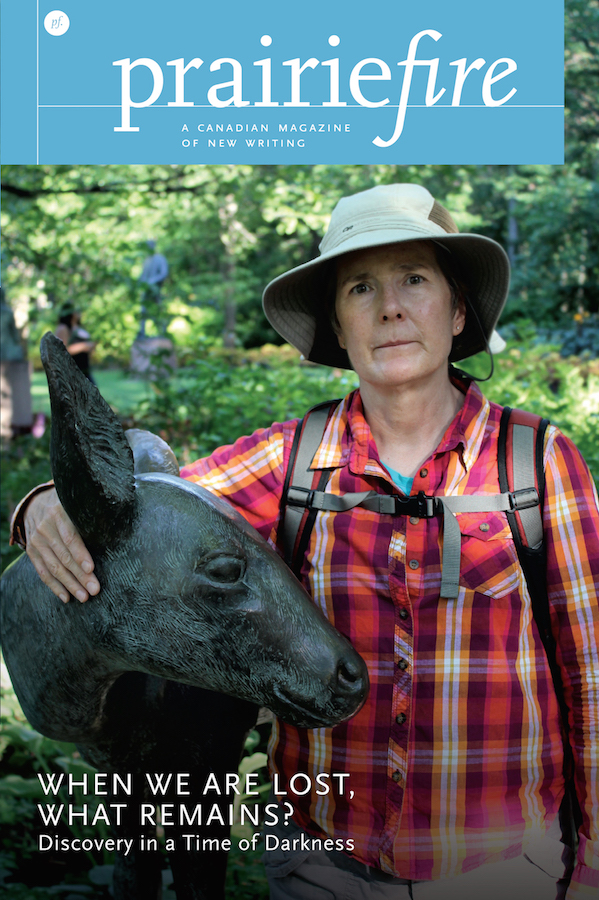 Cover Image: What is Lost Remains by Janine Tschuncky

Autumn 2016, Volume 37, No.3
VOLUME 37, NO.3, AUTUMN 2016
When we are lost, what remains? Stories and poetry addressing discovery in a time of darkness.
Table of Contents

“You want me to kill my baby,” says the pregnant woman. “What kind of a doctor are you?!”
Gina recoils, as if slapped. Her own fetus boxes her bladder in outrage.
“All I’m saying is that she won’t survive for much longer,” Gina says.
The woman’s fetus is a girl—swollen to twice her expected size, with fluid around her neck, in her chest and abdomen, her heart racing like a stopwatch, unsustainable. At twenty-two weeks not much can be done to help. Gina doesn’t know what will happen to her own baby, but she knows the fate of this little one.
For a moment the pregnant woman stares at Gina’s belly—does she notice the bump? it’s barely there—and then, cursing, she wriggles up from the plaid squishy couch and stomps out of the sun-filled room, her seething mother and stunned husband right behind her. The husband looks as if he wants to ask a question, but his mother-in-law grabs his elbow and steers him down the hall. Gina stands in the doorway and watches them go. She will hate me for life, Gina thinks. She thinks my baby’s normal.

Poetry Excerpt
Peace in the Valley
BY Laurie Block

You in your everyday headscarf
walk the ruined streets
of Jenin. You on the wrong side
of the river, the West Bank
of rapture step over the broken
bricks and spent cartridges, one
for every daughter of the desert
in her prison of commonplace grief.

Non-Fiction Excerpt
After the War, Just Us Guys
BY Larry Frolick

We lost our money, my mother said.
It was over. We had to leave our pink house with the rock garden and the big willow tree that survived Hurricane Hazel, and move into a triplex downtown. Come September my brother Walter and I would be going to a new school in the city.
It was lunchtime and she was still wearing her faded grey housecoat. We ate our Lipton’s chicken noodle soup in silence. She stared into her cup of coffee. Maxwell House Instant. The black liquid wobbled at her touch.