The Doll’s Alphabet by Camilla Grudova

The Doll’s Alphabet by Camilla Grudova 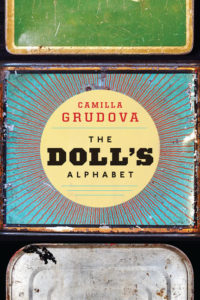 Like a demon wearing a porcelain mask that sits on your shoulder, whispering sweet crypticisms in your ear, Camilla Grudova’s The Doll’s Alphabet captures the alluring texture of nightmares. Though neither horror nor fantasy in any traditional sense, the stories that make up this collection, Grudova’s first, are otherworldly and thoroughly unsettling. Little girls summon up angels and perversions through a modified sewing machine, becoming ill from lust. A woman discards the remains of her old life in order to accept her canine inclinations. The owner of an antiques shop tries to set up his reclusive brother with a mermaid. Haunted by images of sewing machines and tins of sardines, the stories chart the lives of characters, primarily women, who dwell in the nooks and crannies of organized society. The description on the book’s back cover calls the stories “a marriage of Margaret Atwood and Angela Carter,” but I’m also reminded of George Orwell’s nonfictional accounts of urban destitution, if glimpsed through a wonky fun-house mirror. The characters in “Rhinoceros,” for instance, rarely see animals in real life, and must content themselves with the cartoonish depictions on candy wrappers and tins of food, which they cherish, while the narrator of “Waxy” opens her story by telling us that her “new bedroom was an old kitchen;” her landlord suggests she use the broken refrigerator as a wardrobe (29). The world which this narrator describes is particularly horrifying. Women must construct their lives around getting and keeping a Man: “to find a Man who had enough Exam prize money and also wanted to have children, that was the Goal of Life” (41). The narrator, whose Factory job is to write the word “Nightingale” on sewing machines, tells us how as a pre-pubescent girl she had to sleep with predatory Men as ‘practice,’ so that she would know good Men from bad Men when it came to settling down. “Once in a while a girl died from the pain, so you had to be careful and not be too young or careless. It could also cause Nightmares, and a Man did not want to settle down with a girl who had Nightmares or was nervous. Men liked stability and ease most of all” (43). When she does eventually find a young Man named Paul, he is without papers, and thus incapable of earning Exam prize money. She takes care of him nonetheless, while Paul, ultimately, can only take care of her by brutalizing another woman.

What makes this story, and the whole collection in general, so sinister is that, unlike Atwood and Orwell, Grudova provides no explanation as to why her fictional world works in the way that it does, what systems of power necessitate such meager lives. Instead, the emotional and visual tone of the stories is that of an atemporal decay, of no-time and all-time, suggestive of the moment when cultural decadence gives way to an aesthetically-impoverished malaise. There is the sense that a patina of dust covers all the world of the book, and you can never escape the realization that the dust is entirely made up of flakes of human skin. In “Agata’s Machine,” Grudova actually describes an attic in this way: the floor “was dirty, covered with peeling linoleum, carpet, and patches of wood, a repulsive mixture that reminded me of bandages that needed to be changed and the flaky, scabby skin underneath” (66). I had to read this description several times over, I was so in awe that someone had conjured up a metaphor so unbearably tactile I could feel it under my fingernails. The material ‘stuff’ of the world is resplendently described throughout the thirteen stories of the collection, from the fur coats “which hung like giants’ beards” in “The Moth Emporium” (135), to the “shop teeming with unclean life” in “The Sad Tale of the Sconce” (100). In some instances the details border on excessive, particularly in the oft-utilized list format, which seems to have moved from a potential writing tick into an obsession. Nevertheless, these are stories that will linger with you. Their amorality tempts interpretation, while denying straightforward answers. Grudova’s characters, despite their often impoverished lives, do not protest or resist outright, but survive by unstitching themselves, molting away all the artificiality, finding ways to maintain their dreams of one day living in a house made out of a cracker tin.