Botticelli In The Fire & Sunday in Sodom by Jordan Tannahill 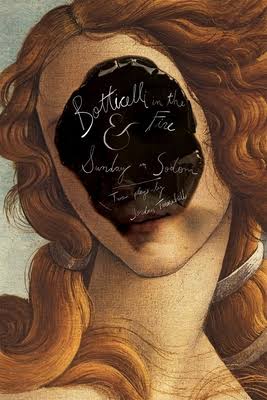 Botticelli in the Fire won the Governor General’s Award for Drama in 2019. Its author, Toronto playwright Jordan Tannahill, is remarkably clever and to an extent knows his subject. On the surface, the story is potentially compelling. The play is set in Florence just before and during the period when the friar Savonorola imposed a fanatical religious reign of terror on the city. The key line in the play: “There’s always a plague, there’s always a fire, and there’s always a friar who wants to throw someone in it…” is immediately relatable in today’s tense world.

Tannahill encourages contemporary comparisons with his characters having smart phones, chill playlists, while speaking today’s presumably hip lingo. Botticellli, one of the greatest of Florence’s artists, with his assistant, Leonardo da Vinci, are caught in the political drama. Being gay, they see that the general terror will likely extend to them. How they escape actually and metaphorically is the supposed essence of the play. Botticelli, to divert suspicion from himself and Leonardo, adds a painting to the infamous Bonfires of the Vanities whipped up by Savonorola. Tannahill wants to admire the courage and cunning necessary to save oneself, which is fine, but once admiring that what are we left with? For one thing history shows us that Botticelli had a religious period and was for a time a follower of Savonorola. His destruction of his painting perhaps reveals a deeper conflict than what Tannahill ascribes to the painter. Of course, there is nothing inherently wrong with Tannahill’s reason that the artist destroyed his painting to preserve his life. Numerous artists throughout history unfortunately have done that, or worse, to survive the fanatics in power, but exploring a mix of motives, which means a mix of emotions, would expand the play in many directions. Going with what we have, no one would doubt the playwright’s cleverness, energy, and theatrical finesse. However, if that complexity surrounding Botticelli were followed the character would have been more compelling if perhaps a little repugnant to our contemporary eyes.

In any case, apparently the story of persecution looming over Botticelli and Leonardo isn’t enough to keep our interest. Tannahill throws in a cliché love triangle with Botticelli having an affair with his patron Lorenzo DiMedici’s wife, Clarice, while she is posing as Venus for his great painting the Birth of Venus. This stirs the pot but the real interest of the audience might be on Leonardo. Like it or not, he dominates the piece simply because he dominates our imagination in a way no other artist except Shakespeare does. His huge cultural presence hangs over the play and can’t be dispelled. He is somewhat more articulate than Botticelli for sure, though unfortunately everyone sounds the same in speaking the play’s chic contemporary patter, which is fine, as noted in the quote above, for a few minutes but incapable of conveying deeper ideas. The Renaissance was as a period exactly what the great critic Walter Benjamin wrote of any historical period: that every book of civilization contains a book of barbarism. One doesn’t know in the end what Tannahill wants us to consider aside from admiration for the artists who always survive as best they can while creating under pressure. Fair enough, but the deeper story is left untold. The play isn’t sentimental but it isn’t as hard headed as it could be either.

Sunday in Sodom, the companion piece in the same volume, is an earlier play told primarily by Lot’s Wife, given the name Ruth by Tannahill, relating her story leading up to the destruction of Sodom and Gomorrah. Falling into the tradition of much of middle-class art, the play presents Lot as an idiot with his wife, Edith, the patient world-weary wiser partner. In some ways the play seems an old fashioned feminist retelling, a relic of the seventies. Its main strength is a hint of Yiddish comic tradition—it could use more. God’s messengers, angels in the Bible, in the play appear to be American soldiers. The modern input of the destruction of Sodom—that it was all about the Iraq war—doesn’t hold up but Tannahill isn’t interested in the original story in any case. He offers his revisionist take with a hip anti-war twist as seen in the dialogue of the angel-soldiers. Ruth turns back in Tannahill’s scripture because she lacked faith that her child would be safe when they fled Sodom. Her long monologue leading up to that moment is strongly written and affecting. That it comes late in this short play is unfortunate. Up to that point, there is no indication that Ruth is little more than exasperated in a comic, albeit seriously intended, turn. The key action set down by the playwright is that throughout Ruth doesn’t move while the other characters do until the moment when she turns back. But the text suggests otherwise. Surely it is Ruth who should be moving all the time until the moment when she is frozen upon turning back while the other characters should be immovable until that moment. Symbolically they are stuck anyway in the old attitudes which bring about destruction At its best, the play is genuinely funny. But again, as with Botticelli, the playwright shies away from something truly dramatic he doesn’t quite realize in his writing.

Rory Runnells is a Winnipeg writer.  He was Executive Director of the Manitoba Association of Playwrights for 34 years. He reviews for the  Winnipeg Free Press.