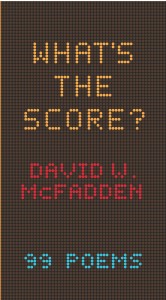 It took me a while to figure it out, but now I know who David McFadden reminds me of – the late American performing artist Andy Kaufman. He has that same almost illicit sense of humour – a kind of wicked take-your-PC-and-shove-it attitude that doesn’t show up aggressively, like it might in America, but detours into a sneaky back door, because we’re Canadians here, please.

What I find in McFadden’s poetry more than life atilt, belly laughs and guffaws, or runs at metaphysical indulgence, is how he thinks and the repercussions of his wildly fantastical thought.

Forty-plus years since the publication of Poems Worth Knowingand I can still sniff the lineage of them in his latest, innocuously titled volume, What’s The Score?The man’s life is recounted with pride and the confidence he has in his poetry. Something is aslant – a marble dropped on the kitchen floor rolls to the hot air vent – yet the something is perfect! Every McFadden book has inspired banalities, or are they banal inspirations? Whatever, they are ridiculously good. No one should be able to write this well, and seemingly so effortlessly.

McFadden is Everyman charming Everywoman, and he never quits, even if he’s stood up. He mines the minutiae of daily events and the head-scratching coincidences that we’d spend ten seconds with had he not pointed out their timeless resilience. A representative poem then, titled sombrely “That Melanoma on Your Left Wrist” – it starts oddly, and doesn’t let up.

I know it’s taken me far too long
to come to terms with the depths of love.
A pair or two of popular styles of living:
torturing oneself and torturing others. (62)

Where is he going with this? It’s a McFadden journey hither and yon, not quite serious, and not quite goofy, but always, always cradling a gemstone of mystery. He knows us inside out as he knows himself, which in a shadowy sense means somewhat tentatively. Thus he can spring on us lines like “The greatest sadnesses are forever those/ that’ll make us look back with a silly smile” (62) which takes us to the precipice and dares us to jump, knowing we’ll simply bunny-hop backwards. Isn’t that what he is saying here?

Elsewhere he writes, “Poetry happens when language is used as a/ device to broaden, deepen and intensify/ the quality of emotion you are trying/ to invoke in yourself” (11) which brings us back to how he thinks, and how he invokes emotion to prestidigitate poetry out of smoke and mirrors. That is what he’s saying – in spades. ♦

Andrew Vaisius is a childcare worker living in Winkler, Manitoba.