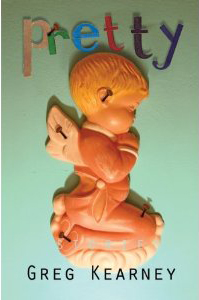 Toronto’s Greg Kearney has a laconic style that is well suited to his subject matter, be it sex comedy or serious issue. His considerable talent is on display in a new collection of eleven short stories called Pretty. His shock tactics gradually become less shocking and more predictable, but he offers up a variety of distinct and believable characters in sometimes comic, always real, situations.

In “What to Wear,” a fellow named Ron worries about how he looks as he anticipates seeing his sister Sheila for the first time in eight years: “[Back then,] I had a perfect body, a waterfront condo, a daily column in the city’s best and biggest newspaper, two nervous Weimaraners, and a beautiful Spanish boyfriend.” (20) Now he’s overweight, has HIV, and lives on disability payments in a housing co-op. Sheila picks him up in a new Nissan and the story takes an unexpected turn when, on the way to a restaurant, they’re hit by an elderly woman in a van. Sheila absolutely (and hilariously) loses it.

In “Scoodly! Doo! Wop! Wow!” we meet a has-been singer named Wanda: “I should’ve taken care of my voice. As with any other body part, I just assumed that it was always going to be there. So I smoked three packs a day and drank and stayed up for days at a time. Now 54, my voice is shot. I have the range of a dial tone.” (55) Into her life comes a dysfunctional married couple named Roy and Nina who want to make a documentary about her. Their sniping at each other as they try to figure out how best to film her is beautifully done.

In the funny “Mary Steenburgen,” Cliff gets what he wanted for having survived a heart attack and a coma: a “three-way” with his wife Denise and their cleaning woman Clara. It goes well and results in Denise’s contemplating other combinations. Both women are distinct characters evoked through a minimum of description and dialogue.

“Cloris for One Day” introduces two guys, the unnamed narrator and Glen, who are in a long-term relationship. Glen has beaten colon cancer and wants to do something significant before he gets sick again, such as adopt a little Chinese girl. He is talked into trying such a responsibility out by babysitting a four-year-old named Cloris, the adopted daughter of another gay couple. The not-so-pleasant experiment is humorously rendered.

Perhaps the best story is “Ellipses,” narrated by 15-year-old Nelson. He describes the day his much older brother Doug brings his new girlfriend Crystal over to meet Nelson and his mother. In a few words of conversation, Kearney brings three people to three-dimensional life:

“Crystal,” Mom says, “try my vitality juice. It’s my little secret—if you’ve been wondering how I stay so young-looking.”
“Okay. I haven’t really been wondering that, though,” Crystal says.
Not mean, Crystal. Just dumb.
“Oh!” Mom says. “A war of wits is going on here! I’ve got to be on my toes around this one.”
“What does she mean,” Crystal asks Doug.
“She’s just joking around,” Doug says. He takes a sip of his drink. (72–3)

It’s a fine story-length scene in which the dialogue reveals how clueless Crystal is and how she’ll come out fighting when she doesn’t grasp the subtleties of the comments and quips. Doug emerges as a wuss who, at 40, has obviously never had great relationships.

Pretty is Greg Kearney’s second collection; his first was Mommy Daddy Baby. Three or four of the stories in Pretty are not as effective as those mentioned, but the good ones are very good indeed, highlighted by a fine sense of humour and an admirable economy of phrase. p

Dave Williamson is a Winnipeg writer whose latest novel is called Dating.