My Mother Did Not Tell Stories

My Mother Did Not Tell Stories 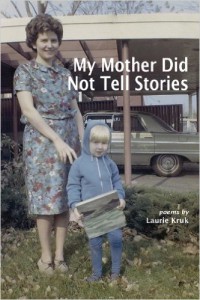 Though Laurie Kruk’s latest book of poems, My Mother Did Not Tell Stories, possesses an ambivalent title – storytelling either as a way of transferring lore around a kitchen table, or as a euphemism for lying – her poetry steers clear of added or extended meanings. Kruk stays remarkably straightforward and, I presume, true to the mother of the title.

The book begins with a bevy of mother-daughter poems: poems of passage and continuity between mother and daughters. In “Reliquary,” saving her daughter’s baby teeth remains simply a familial ritual in spite of her attempt to make it more by flashbacking to the birth: “pushing her out again,/ lavender-grey, perfect, whole:// … our legends of ourselves.” Other than the descriptive lavender-grey, she seems to resist any sparkle to challenge the prosaic flatness. Yet I think that is part of her poetic strategy: to create no roadblocks, and to avoid ambiguity in hopes of presenting unadorned and entirely understandable poetry.

The picture of the poet I form is one of an observant, self-deprecating mother. Rarely does this noun/identity stray from the poems in the volume. Not surprisingly, it is poetry with punch lines too. All of which is to say that Kruk isn’t necessarily uninteresting, heartfelt or truthful, but that the poetry is pastel and predictable. If I were to offer a resemblance I’d say it is to the work of Tom Wayman. It’s poetry that craves to be understood. The ideas are respected and elevated to a greater degree than the words. For example, the Christmas dinners with the relatives sound like hell to endure, and are conveyed by lists of “What we can agree on” and “What we can’t”. Such as: “the sacred bird must be sacrificed/ at three hundred and fifty degrees” and “the dishes must be done, but left to the least ‘merry’” for the former, and “what to do with the silence between mastication” and “ex-wives must never, ever be mentioned” for the latter. It all sounds a bit staged, but Kruk succeeds.

I find the middle section of the book the most appealing. Their family has purchased land and a cabin unwittingly in a flood zone, and the rising water prevents their escape from the urban centre for a break in the bush. In this French-speaking area they are outsiders, even though they are landowners. Their eviction, so to speak, by the spring flood waters is the beginning of everything going south on them, but more importantly, they persist.

The ability to laugh at oneself shines in poetry like this, and the poems are stripped of any speck of pretention or pride. Strange as it might sound, I feel this is poetry for travelling. It doesn’t clamour for attention but clears the mind for reflection. ♦

Andrew Vaisius is a writer in Morden and a day care centre director in Winkler, Manitoba. His Domestic/Imported chapbook is in a second printing.