Metastasis and Other Plays

Metastasis and Other Plays 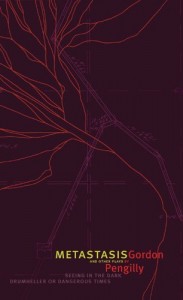 Metastasis and Other Plays by Alberta playwright Gordon Pengilly is a collection of three plays drawn from a sizable body of work dating back to 1975 that Pengilly has written for stage and radio. It’s clear that a publication of his work has been long overdue, and NeWest Press should be commended for making a selection available. This collection features the title play, Metastasis, which premiered in Edmonton in 1995; a more recent play, Drumheller or Dangerous Times, first produced in Red Deer in 2001; and the most recent work, Seeing in the Dark, a radio play produced by the BBC in 2007 and the winner of the BBC International Radio Drama Prize that year.

Taken together the three plays explore the nether reaches of Alberta life and history, depicting characters who are isolated and adrift in a world of violence and irrationality. The characters are essentially on their own, individuals struggling vainly to survive against forces beyond their control. Pengilly’s characters ultimately have nowhere to turn for release but inward, and as Deerborn in Metastasis discovers when searching inward, his soul is like an oyster moving around in its shell, a most “uneasy feeling,” he concludes (125).

Metastasis, the middle play in the collection and the most complex in terms of structure and subject, revolves around the lives of two families, the Deerborns and the McCoos. Both families and an ensemble of 17 other characters are drawn into a drama of comic and absurd proportions when Deerborn, a womanizing doctor, becomes the victim of a drive-by shooting on a freeway (in a city much like Calgary). He survives the shooting but undergoes a conversion experience of sorts. In trying to account for the unexplained act of violence against him, Deerborn decides that he was shot at because of his “wanton behaviour,” his marital infidelities with his nurse Tammy and a host of other nurses, among others. “I’m a dirty rotten scumbag,” he says to his wife Carol, “and I want the rest of my life to be different: clean and chaste and with you” (85). Carol forgives him, then sends him packing and takes up with a much younger man who turns out to be her own son’s lover.

Each event spawns a set of fateful consequences and furthers the narrative’s descent into absurdity and chaos. When Deerborn leaves his practice as a surgeon, for example, he leaves in the midst of an operation. The patient, Helen McCoo, a married woman with three children, later rationalizes that her doctor’s desertion was a result of messages he found in her “entrails” (104). “That’s why he ran away from the surgery,” she explains to her teenage son Kenny, “it had to have been important . . . We are all bound up together in this like one big family. Dr. Deerborn has some kind of huge fight on his hands” (105). Indeed, he does have a fight on his hands, an intense metaphysical struggle, in fact. It is one that leaves him standing on a hotel ledge, preparing to meet his maker, after having bartered away his soul to a fiendish character named Hardball. There is a gesture toward redemption at the end of the play, but its possibility is muted or even negated when, in the final scene, another random act of violence is set to take place. The act threatens to upset the story’s movement toward equilibrium and to initiate a new cycle of lurching violence. Pengilly calls Metastasis a tragicomedy, but its so-called tragic qualities are never in evidence. The work should really be read as a black comedy in the vein of a George F. Walker play.

The second stage play, Drumheller or Dangerous Times, looks back from a vantage point in the civilized present to the relative lawlessness of the Alberta badlands in 1924. The play establishes a frame narrative in the present with the character of Frank Bloomfield, an employee of the Tyrell Museum in Drumheller, who is delivering a talk on the subject of the badlands. His grandfather, Dr. Bloomfield, had been a paleontologist in the area in 1924 excavating dinosaur bones in a nearby mine until its collapse. The grandson, using his grandfather’s journals as a guide, wants to know the truth about what happened that distant summer. Why did the mine collapse? And whose human remains have recently been found in the mine? As part of his investigation, Bloomfield interviews an old woman who was at the centre of events that summer. In the text she is identified as Old Woman, although she identifies herself as Hannah Bruce, former owner of the “bed-and-breakfast” (139) where the play’s central action takes place. At first, we presume that the play is a reconstructed version of Bloomfield’s detective work, but by the end of the play, we realize that the story is more likely being filtered through the memory of the Old Woman, who may not necessarily be the person she claims to be either.

The mystery in the past involves the arrival of a young couple, probably American, at Hannah’s bed-and-breakfast, which previously had been a brothel where Hannah worked. The couple, Bobby and Nicky Snow, claim to be newlyweds travelling to Alaska on their honeymoon. Their car has broken down, and they are forced to spend the night at Hannah’s. Their true identities as fugitives on the run are eventually discovered by John Gallagher, the local mine owner and a man with a criminal past. Dr. Bloomfield, the paleontologist, discovers an attraction for Hannah, while Gallagher rejects his flame Hannah for the younger Nicky. The play, with its film noir-ish tone and plotting, ends with a melodramatic flourish and a deepening of the mystery.

Drumheller examines the uncertainties of history, the ways that time buries and obscures the events of the past. Even as the play unfolds before us, we are left wondering about where the truth lies. Pengilly calls attention to this indeterminate nature of his narrative and plays with its documentary aspects. In one scene that ends with a particularly telling image, Nicky stands “stripped to the waist” before a mirror, brandishing a gun: “Some of this is true,” she says, “and some of this isn’t” (144).

At the start of Pengilly’s radio play Seeing in the Dark, the central character, Clayton Sydora, 26, is found languishing in jail for the second time in his life while contemplating a postcard he has just received from his brother on Vancouver Island. We hear the sound of the sea, seagulls, and ship horns, and Clayton says that the sound of the sea is not his but his brother’s: “I’ve never been to the sea,” he says (18). On that count, however, Clayton overlooks the possibility that all his life he has been at sea, on a long journey, and has not yet made it back home. He begins his story by recounting the day, two years earlier, when he starts out for home after being released on early parole from the Drumheller penitentiary. Clayton comes from a town in the Alberta foothills, and back home he has parents, a brother, a girlfriend, and a job awaiting him. All he has to do is make it home. “What could go wrong?” he remarks unwittingly, moments before boarding the bus home (23). Within a matter of two days, everything goes spectacularly wrong for Clayton. He’s kicked off the bus for having sex in the washroom; he gets blinding drunk in a hotel room that night; and the next day finds himself driving a stolen car with a dead man in the passenger seat and a gun in his duffle bag.

Of the three works in the collection, this play is without doubt the darkest. Clayton is an apparently doomed character with a propensity for violence that has been bred into him. He has no scruples, no feelings of remorse, and little understanding of his life or actions: “I’m telling you this as if I understand it all . . . But I know that I don’t. I’ve put this together out of memories and nightmares and there’ll certainly be time enough to see what it all really means, now that I’m alone again in the dark” (18). Clayton does have his imagination to fall back on, and it will perhaps be this that saves him while in prison: “I found a book in the prison library that has some poems in it about the sea, and about a lot of other things, too, that are as deep and as powerful as the sea, like love and death and redemption and suffering” (18). Pengilly reaches deep into Clayton’s character and enables us to see the humanity within, even if Clayton will be unable to finally find his way through the darkness of his life on the outside.

Pengilly’s dramatic material as presented in these plays is dark and provocative but laced with comedy throughout. Pengilly should be better known by audiences and critics in this country and beyond. Admittedly, his work delivers a rather bleak portrait of the world, at least in his part of the country. Characters suffer alone with feelings of anxiety and alienation. They have no one to rely on but themselves. The conclusion of Drumheller conveys this acute sense of isolation in the characters, when in Nicky’s case, for example, she seeks release by taking her own life. When she fails, however, she abandons her past life and assumes a new identity in the solitude of the badlands. ♦