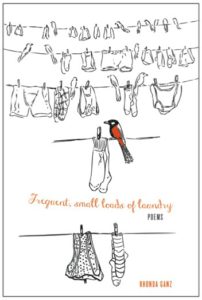 Rhonda Ganz’s day-by-day structure for Frequent, Small Loads of Laundry makes the reader think Wednesday’s child is full of woe. She is, but much more beside. As a first book, the voice, the care, and the self-reflection are remarkable. Unrelentingly personal scenarios with a cast of voices make Ganz’s debut a declaration. What’s next? What will this voice now speak?

She called all of them Cowboy, baked sour cherry pies,

asked most to leave before daybreak. (2)

She didn’t believe in repeating herself. Given the chance,

she would do everything differently. (2)

Nevertheless, repetitions come, and the reader constantly rethinks what has already been written and read. Repetition is both the matter of the poems and their method. The mythic becomes quotidian with “Persephone Tries Internet Dating, But Every Man Reminds Her Of Hades” in which “Demeter insists I go on blind dates;” and “Don’t be so fussy, she says. / They can’t all be Greek” (4). This pushes the reader into confronting the temptation in poetry to make the everyday exceptional, as if an Ode to Tinder would recuperate the radical alienation of quotidian life. Ganz instead pushes further into the everyday to break the conceit of elevating and instead closes back on the familiarity of loss that takes comfort in its ordinariness rather than hiding in exceptions: “I miss you. / I miss our dog” (5).

This feeling that the mythic doesn’t somehow go beyond then holds to the reader proceeding across Tuesday until “All-Night Grocery” opens with the casual “Mention in passing, Cleopatra, / a bath in asses’ milk,” that sends the lover for milk to warm in the microwave (the ordinary intrudes) and then symptomatically lengthening lines for transportation to “where bliss is cresting Kneecap Mountain, climbing breast Plateau, / rising Shoulder Hill. The whole room smells like melted sugar” (11). Taken on its own, the poem melts in this richness, but it’s then hard not to warn Antony of Octavian’s return, the city’s siren call, and the asp waiting for the Queen.

Stylistically, Ganz varies the poems in the collection significantly, but the voice remains familiar. Beyond the mid-point, the poetry increasingly concerns loss. “Apocalimbo” shows “Dead ducks in the tailing ponds…. / We send the smallest into the tunnels first” (34). Anticipating tragedy, the verb tenses shift in “I Sleep The Sleep Of The Dearly Departed” for which the inversion of Eurydice says “My husband has left me for the dead” (47). This shifts from past to “My husband takes” and “If my husband can” and back again to “didn’t” and finally, the provisional “I want to ask my husband” (48). This is preparation for greater attention when we lose the husband to the dead woman, who is perhaps the memory of Eurydice herself, to finally hear “My child’s name was Carter, she says” (48). The simplicity of past tense suddenly makes it difficult to miss the deixis from “I” to “she” as a strategy for avoiding self-reflection and pain.

The reader closes the collection with the inverted face of desire that opens it. The everydayness of loss manifests in the dead mother poem, via Stephen Dunn, but turns in its closing back to Eurydice when “Dead mother trumps / dead father” leading in closing to “Dare the dead child, and / even a poet can’t bear / the next line” (67–8). It comes again in the sublimation of the dead cat in “Schrödinger’s Ladder” and the refusal to face what the poet can’t bear when deixis again loses the “I”: “the mother saw the ladder shift” and so tenderly “the boy’s hands holding the ladder were small” (69).

Every reader finishes the collection confronting the aporia shaped around the contours of loss. Ganz offers a compulsion to repeat by ending with “Permit Yourself An Afternoon Of Wailing II” in the centre of which the unspeakable palpably appears as a visible gap in page, just after the caesura. This is where Ganz’s talent speaks so forcefully—the reader needs to return and repeat (the poem is Part Two), just as the poetic voice continues to pass over memories again and again. We fill this gap with that which our own voice can’t dare and can’t bear.