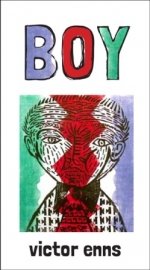 In Victor Enns’s Boy, family and locale figure prominently, as well they might when the topic is adolescence. Enns feels dearly about his sister, not as strongly about his brother, he desperately needs his mother, and Dad keeps a leather belt in his roll-top desk.

We are out on the prairie, where inertia can be an optical illusion. The poetry is steeped in guilt and religion, yet isn’t just that. Enns is wry and knowing. Early on in “This Wheel’s on Fire” he sets the alarm in the first line: “Goethe and Schiller are on fire” (23). The school library is burning, and nothing beats the last three lines for their scorching irony:  “the school / is burning down / can you see the light?”

Above all else, Enns writes concisely. I think immediately of Raymond Souster’s prose-like telling with a twist that keens the story. In “Rabbit Bones” Enns tempers his guilt for leaving the warren open with this final stanza: “Little bones/ in the barn/ scattered, the cats/ now hiding/ in the long grass.” (59) In “House Arrest” the boy is beaten for coming home late, the parental excuse for the beating being that he would be better “safe” at home.

In the poem on George Chuvalo being pummelled by Muhammed Ali but going the distance, we find the Canadian prizefighter

George not paying
any attention
to anything but
staying on his feet
doing his impressio
of a brick wall
graffiti on the way. (84)

Nearly all the poems are less than a page in length, and I think he talks to God rather than with God, a distinction appropriately discriminating for an outsider to south-central Manitoba where he grows up. The poems follow a conspicuous pattern when they are self-referential. “I lock” “I follow” “I caught” “I run” “I ask” “I keep” “I’m allowed” “I sell” “I learn” “I see,” etc. These are the first words in the first line of a random choice of poems. Perhaps Enns wishes to emphasize the short distance between child and writer, a kind of authenticity of proximity. Perhaps he aims at a kind of diarist entry with this technique. Whatever the case, it becomes quite noticeable and distracting. Better to savour the badass attitude that surfaces time and again with the farming community safely in the rear-view mirror, “a place /as small as the eye / of a needle and as full / of itself as a bag of dirt.” (55) ♦

Andrew Vaisius is a childcare worker living in Winkler.