A Dark Boat by Patrick Friesen

A Dark Boat by Patrick Friesen 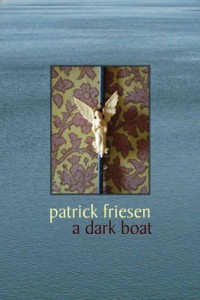 During a taping of the radio show Speaking of Poets, Patrick Friesen and I were discussing the trip he took to Spain in 2010, following an earlier one to both Spain and Portugal in 2005. Patrick, who doesn’t appear to do anything in half measures, was delighting me with his discussion of Portuguese fado music. If you’ve never heard fado music, you should. It is an intense, raw, emotional music which Patrick compared to the Delta blues, another passion of his. Or you could just read this book, which is imbued with his reminiscences of his trip and the music of fado. (If you want to hear fado music in Winnipeg, try to catch a live performance by Marco Castillo, whose father was an internationally renowned fado singer, a tradition Marco continues, or listen to the two CDs Marco has released.)

Patrick Friesen has released about a dozen books of poetry as well as a play and a variety of other writings. George Amabile, a mentor to him in his formative years, tells the story of a party at Patrick’s house, when Patrick came running up from the basement with some manuscript pages in hand and a jubilant expression on his face, having crashed decisively through the usual line-length barrier to display a long, winding line that took several lines of the traditional poetry book to unravel. These long lines came to dominate several of Patrick’s most recent books. Not this one. You will not find long lyrics in fado, which deals with lines that punch you in the gut, leaving you breathless. It takes place in dark streets where women cry out in hurt and anger about the misdeeds of their men while those men negotiate illicit deals in those same dark streets. That’s what the lines in A Dark Boat do.

It’s hard to avoid considering another potential affinity in this book – one with Rimbaud, whose book The Drunken Boat was a trailblazer and not just for French poetry. Perhaps Patrick saw it as his own trailblazer, allowing him to return to shorter lines.

The title poem, which opens the collection, reveals the change in his poetry:

you are alone
and you mean precisely that

half-lit by the lamp
you have nothing

A “fadista” is a female singer of fados, as the glossary at the end of the collection explains. These lines create an aura of expectancy, as if something sinister is waiting to happen. The poem captures the essence of the small out-of-the-way cafes where this music would be heard, the darkness of a life spent in poverty and yet one rich in emotion. There is a something primordial in these lines, something raw and earthy, as if life is being lived in its essentiality, in the moment of heat and passion.

The short lines of “Rua da Saudade” capture another emotion:

bending through
shade and light
going nowhere and
arriving

They contrast the Rua da Saudade (“longing street”) with the three women. There is movement here but it is a repetition, a movement that turns back on itself, “going nowhere.” Life remains the same. A dog is always barking from some courtyard and three women always stand in an open doorway. This is the rhythm of existence.

The book includes photographs that highlight the descriptions of streetscapes. In the first (on page 21), the image goes from shadow into light, and one wonders whether one is seeing the tracks of a streetcar descending in a serpentine fashion along the centre of the street. One expects cobblestones, but this street appears to be made of asphalt, indicating that modernity has invaded even this centre of traditionalism.

“Waiting” takes us in another direction – this one rhythmic, with a hint of rhyme:

The reader schooled in traditional poetic technique may be shocked at lines 2 and 3. The traditional view is that the strongest words in a line should be reserved for the first and, particularly, the last words of that line. Here we encounter “the” and “and.” Patrick explained, when I asked him about this on Speaking of Poets, that this was how he heard the line. Here is an example of having to know the rules before you can break them – and Patrick knows the rules. Notice how an air of anticipation is created by ending the second line with “the.” “The” what? we ask, as we anticipate the answer. (As an aside, even such prominent poetic craftspeople as Don McKay and Lorna Crozier have ended lines on seemingly weak words.)

The motivating factor for Patrick’s excursions to Spain was to pay homage to a poetic idol, Federico García Lorca. It would be remiss of the reviewer, then, not to include a poem related to Lorca. Lorca’s most famous poem was dedicated to a bullfighter friend who died in the ring. The poem is “Lament for Ignacio Sanchez Mejias” with its haunting refrain “at five in the afternoon,” which does not refer to the time of Mejias’ death, as most people think, but to the time of his funeral. Patrick has responded with “It Was Five in the Shade of the Afternoon”:

This is a beautiful homage to a great poet. Reading the poetry of Patrick Friesen is an instruction in how to write poetry. A Dark Boat is no exception. ♦

John Herbert Cunningham is a Winnipeg writer. He reviews poetry in Canada for The Malahat Review, Arc, The Antigonish Review, The Fiddlehead and The Danforth Review, in the US for Quarterly Conversations, Rain Taxi, Rattle, Big Bridge and Galatea Revisits, and in Australia for Jacket.