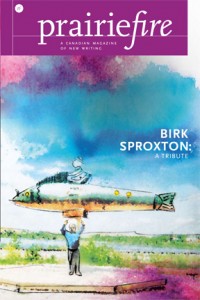 The PF cover image was created by Tetro Design, based on a photo of Birk Sproxton that was sent to us by his wife Lorraine. The photo was taken in Flin Flon, Birk’s home town, and depicts him standing in front of the statue of the town’s namesake, Flintabbatey Flonatin. Flintabbatey is the hero of an early 20th-century pulp novel who discovers an underground city. The local myth states that the town’s founder came across a copy of this book in the desolate bush while prospecting, and from this unlikely encounter the town was named Flin Flon after the hero’s nickname. Incidentally, the statue was designed by cartoonist Al Capp of Li’l Abner fame.