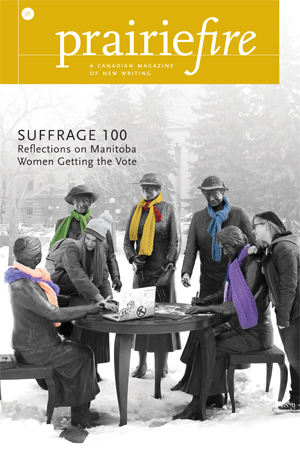 Cover Image: The Famous Five by Helen Granger-Young
This group of sculptures, situated on the grounds of the Manitoba legislature, wearing knitted scarves by Cathy D’andrea and friends and joined by practicum students Natalie Podaima and Katrina Zmavc, was photographed by Janine Tschuncky. Treatment of photo by Tétro Design.
Spring 2016, Volume 37, No.1
Suffrage 100
This issue features 17 short pieces reflecting on the 100th anniversary of (some) Manitoba women getting the vote.
Table of Contents

It takes us most of the day to drive to Barrhead where my father is working. Most of the day driving straight north into blowing snow with my mother leaning forward, chest close to the wheel, shoulders drawn up. “It’s not easy,” my mother says and I’m not sure if she means the driving or if she’s talking about my father who is a seismologist and away most of the winter. We’re going to Barrhead to surprise him because it’s New Year’s Eve.

Whose words were these?
Because they are women,
they stand in line.
One to another,
the question passes down.

In the fall of 1982, shortly after our family landed at Tel Aviv’s Ben Gurion airport with our dozen suitcases, boxes of books and brand new roller skates, Israel invaded Lebanon.

This meant nothing to me. I was twelve years old and preoccupied with my jeans being a little too tight. I’d had my braces taken off prematurely before leaving Canada and liked to run my tongue over my smooth, newly straightened teeth. I wanted to know what we were eating for dinner. I hoped I’d have my own room in Tiberius, where we’d be living for six months while my father worked as a United Nations peacekeeper on the Golan Heights between Israel and Syria, who were also at war.