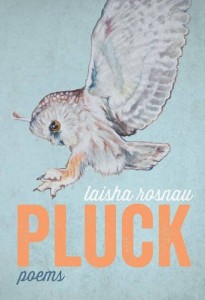 The first as well as the most lasting impression of Laisha Rosnau’s third book of poetry can best be summed up as “young-maternal.” Rosnau writes from an internal reckoning based in the centre of her body. Her pursuit of themes is uterine grounded. Not that most of the poems concern childbirth, but that the basic, profound, life-altering experience of motherhood covers this work like a giant quilt.

Guided by the tactile and sensual, by instincts and non-judgmental nurturing, Rosnau brings a precariously heightened sense of responsibility into these poems. “Other people do it better, I’m sure” she exclaims, constantly worried about being “balanced just so,” typifying the mother who can’t yet does pull off the Halloween costume party with her daughter. And she is down to earth: “babies are an affront and a confirmation.”

Inextricably bound with motherhood are Rosnau’s dispatches from the front lines of womanhood. What we think we know about the poems we know with an asterisk: “she drove / herself, the road was narrow / and it curved and it kept going / as long as she did.” These last lines of the book sound like a promise or hope, but the unnerving “as long as” rings an ominous note that persists after we put the book down.

Compare that poem with an earlier one (“Girl at the End of the Drive”), in which the poet recounts a fearful incident of misogynist violence. The drive of the title is an actual driveway, and it is too dark to see clearly. A woman’s scream engages the poet to a razor-sharp tension of who/how/why, until an engine revs and the sounds fade into the night. The image haunts us as it must haunt every abused woman who has felt “the hand that traced her arm so lightly on that first drive.” It’s a brutal and a commonplace irony.

Rosnau beats no drum; her mission remains true. A poem like “Accumulation” reads as if it is a list, though in essence it is a poem about ennui brought on by amassing all the stuff in our lives. Similarly, in “Easy Now,” weariness is writ large as the parents wait for their children to fall asleep in the back seat of the car on their road trip. They hunger for the moment they can cease to be “on call.” Rosnau can celebrate a small victory while pumping breast milk for her daughter: “I’m crazy for all of this – you, / the kids, the work, the words.”

She sounds totally genuine. Her awareness fertilizes her life experiences. Her poems are heartbreaking and dark, subtle and complex, but never overwritten or patronizing. Her sensibility deepens and holds fast. She is a poet to treasure and reread. ♦

Andrew Vaisius is a childcare worker living in Morden, Manitoba.