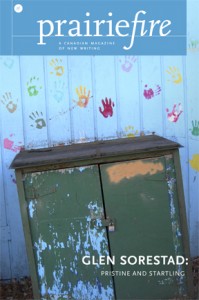 One contributor a week will be revealed on the Journey Prize Facebook page (www.facebook.com/TheJourneyPrize). Jay Brown’s name will be announced on July 19, and Amy Jones’s on August 7. (The first name was that of Winnipeg writer Steven Benstead, for a story published in Grain.)

Journey Prize Stories 25 will be published by McClelland & Stewart. In early October the Writers’ Trust of Canada will name the three finalists for the Journey Prize, worth $10,000. The winner will be announced at the WTC’s annual awards event in November. At that time, McClelland & Stewart will give an award of $2,000 to the publication that originally published the winning story.