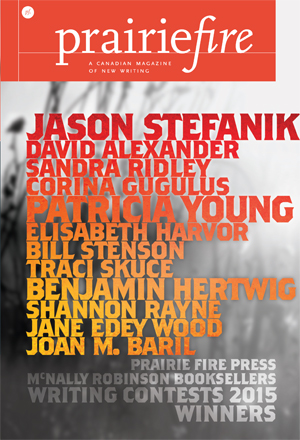 Summer 2016, Volume 37, No.2
Writing Contest 2015 Winners
This issue features winners of the 2015 writing contests and includes a new story by David Bergen.
Table of Contents

Notes on Contributors
A Farewell to Harms

The summer I turned nineteen my girlfriend went to Italy to work as a cook for a crew that was rebuilding houses in the aftermath of the earthquake in Udine Province. She wrote me long letters on thin sheets of paper. The letters arrived two weeks after she wrote them and as I read her words I was aware that what I was reading had already passed, she had moved on to some new experience, and so I felt as if I was following her from some great distance, catching a brief glimpse of her, only to have her disappear into a future that I would hear about fourteen days later.

I bought him on a whim
in a trendy store on Danforth Street
selling silver and the gypsy look—
more for fashion than for fire,
more for the feel of his smooth bald head
than for sermons on compassion.